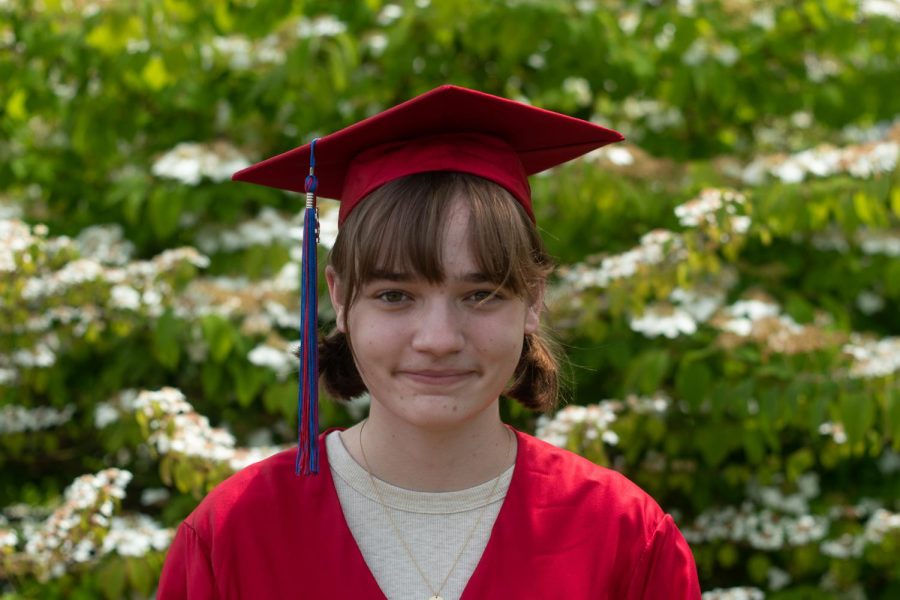 “Taking my first AP class sophomore year, it was kind of a reality check,” salutatorian Emma Olson said. “Realizing like, getting a C on a test is a really good thing.”

While salutatorian Emma Olson has always strived to achieve the best grades she could, the title of salutatorian has never been a specific goal she had in mind.

Olson has been working to have more balance in her life, taking time to do other things she enjoys.

“I definitely think that [it] is so important to have things other than school that I like, things that make you happy no matter what because while school can be a really positive wonderful thing,” Olson said. “It’s also really draining and can be hard to just manage on its own. So having those positive blocks of time that are set in your schedule are just so helpful.”

Since sophomore year, for example, Olson has become a part of theater in various ways, from joining crew to becoming set organizer. She remembers staying until 9 or 10 p.m. in the theater, creating “the most wonderful things with absolutely lovely people.”

Forcing yourself to be a part of something, Olson says, is one of the biggest takeaways from her time at La Salle. Even things far outside of your comfort zone can lead to productive learning experiences.

For Olson, choir was something she thought she could never be a part of. Even still, when a friend told her she should consider joining, choir quickly became an important part of her morning routine. “And it was this crazy world,” Olson said. “I was like, ‘Oh my god, did I join a cult?’ But it was also so fun.” Especially as a morning person who loves to get on her way to school at 7:30, choir became the perfect fit.

Despite her involvement in these activities and more, school has become essential in Olson’s life. Her commitment to school is not out of responsibility, but rather Olson’s natural curiosity, which has led school to become an enjoyable place rather than a chore. This has also helped her tutor those in the counseling department, something Olson has participated in since freshman year. “I just love learning things.” Olson said.

With curiosity as a big motivator, Olson has found she does not need to study in a hardcore fashion. Instead, she simply pays attention in class and keeps track of how she uses her time. This curious attitude is further bolstered by her enjoyment of school.

“[I‘m] always looking forward to break like anybody else, but I’m also like, two days into summer vacation and missing school already, because it is kind of my favorite thing,” Olson said. “Even though I’ll complain about it like anybody else.”

Despite being agnostic, Olson’s natural curiosity has interested her in Catholic teaching and in religion classes at La Salle. Especially in world religions this year, Olson finds learning about others’ belief systems to be interesting from a neutral perspective.

“[Religious studies teacher Mr. Tom Mac] is just the most wonderful teacher,” Olson said. “So passionate, it was just so much fun every day to learn and just experience new things and new ideas, or even just new ways of thinking like it’s just super, super interesting.”

Olson’s main points of academic interest are art and STEM fields. And, even though many might consider these disciplines as polar opposites, she considers them both to be inextricably connected.

“In my brain, they’ve always been really interconnected because of how they kind of work together,” Olson said. “I don’t remember the last time I created something that didn’t have to do with the environment or involved nature, very literally.”

Much of Olson’s art involves botanical dye work, meaning that she collects plant matter, puts it into a pot, which creates dye, and works with dyeing natural fibers like yarn or paper.

“It feels kind of like a science lab or a scientific study each time I’m doing this process because of how specific and detailed it is,” Olson said.

As someone invested in environmental justice, nearly every piece of art Olson makes has some connection to nature. Because of this passion, Olson sometimes attends climate protests and considers herself politically engaged — especially when it comes to climate action.

This has inspired her to continue her education in environmental science and study Art at Willamette University in Salem.

As a small school, close to home, and located in an environment that interests Olson, she found Willamette University to be a perfect fit. Though she is nervous, she’s also excited about the new opportunities available in college and learning about even more specific and nuanced scientific topics.

For those who will still be attending high school next year, Olson said to keep in mind that it’s not the end of the world to not have straight A’s. 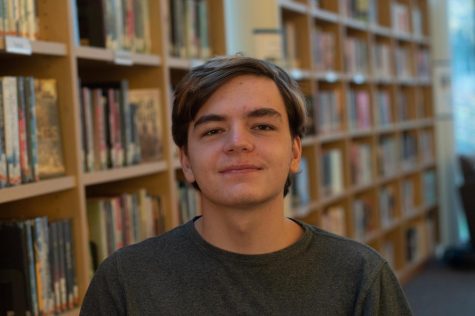 Andrew was born in Chandler, Arizona, but has lived near Portland nearly his whole life. He loves the temperate weather in Oregon, and often takes walks...