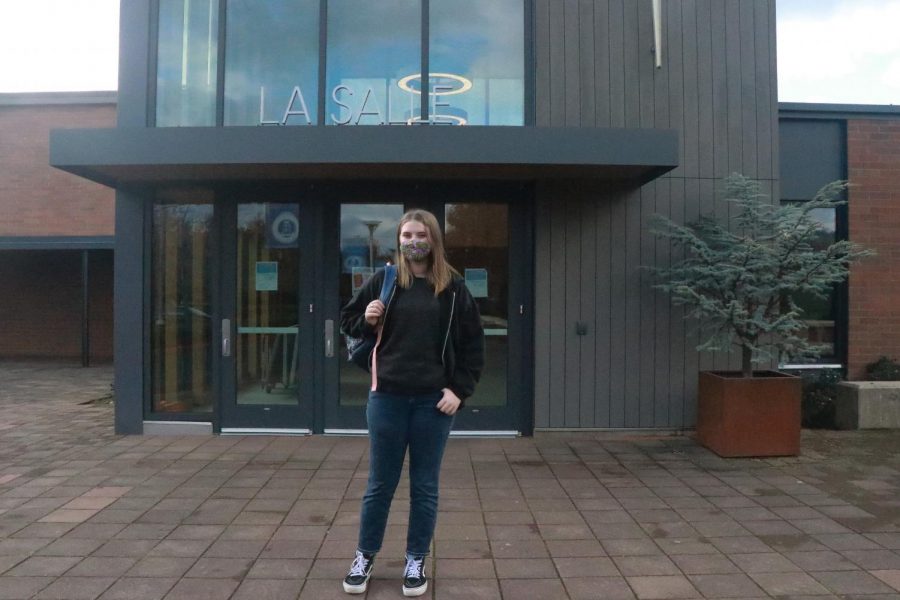 Freshman Violet Sheehan is more of a visual learner, which has made it difficult for her not to be in the classroom. Because of this, she has appreciated the time her teachers have given her for questions after class.

Freshman Violet Sheehan dove into art at the age of three and has been creating it ever since. Sheehan is excited to be a part of the art program this year at La Salle.

Her mother attended Oregon State University where she majored in art, so Sheehan has “always been exposed to art,” she said.

Sheehan’s mother is now a kindergarten teacher and has always had closets filled with a variety of different art supplies, such as glitter paint and charcoals. “She just kind of gave me the supplies and said ‘okay, if you want to you can use this, but you don’t have to,’” Sheehan said.

“It’s just part of growing up,” Sheehan said. “I know I loved doing art when I was younger… it’s just so much fun.”

In addition to experimenting on canvas, Sheehan enjoys watching television, advocating for women’s rights, and playing with her cat. Sheehan’s favorite television shows to watch are comedies.

Coming into her first year of high school, Sheehan is interested in French class, since her middle school didn’t offer it. “I’ve always wanted to learn how [to speak French],” she said.

“I’ve always been a big history fan,” she said.

Sheehan joined the Speech and Debate team with Mr. Michael Doran and the CommuniCare club led by Ms. Elizabeth Banta. Sheehan participated in an after school Speech and Debate club during middle school, and she said that joining a high school team is “something that I’ve wanted to do.”

Despite COVID-19, Sheehan has been able to participate in virtual competitions for Speech and Debate.

Since she is a visual learner, it has been difficult for Sheehan not to be in the classroom, but now that she has met with her teachers and learned more about the grading policies, “it’s gotten easier,” she said. She has also appreciated the time her teachers have given her for questions after class.

Sheehan’s one major hope for her freshman year is “that we at least get to a hybrid schedule.”