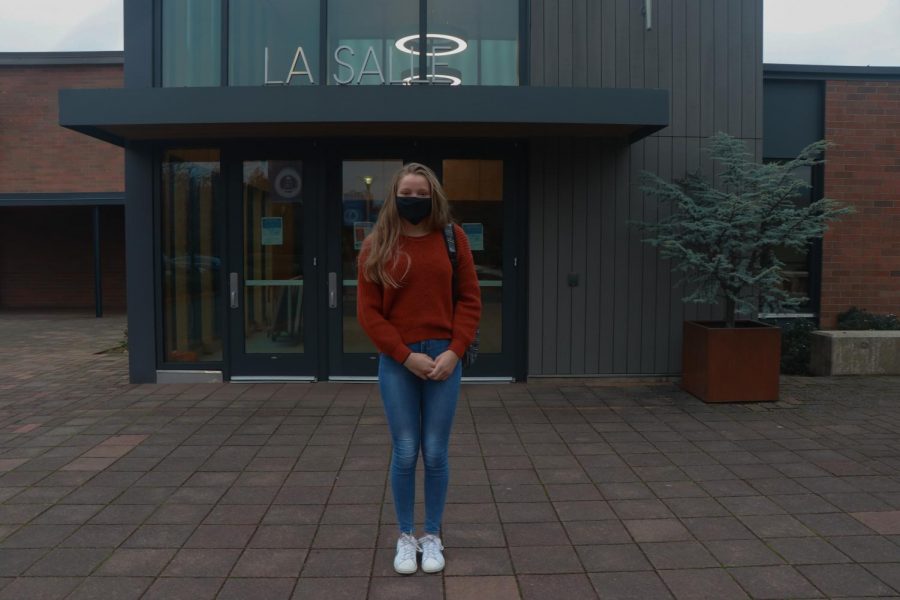 Due to the coronavirus pandemic, freshman Keri Glad feels that she has grown closer to her family, because “they are really the only people I can see right now.”

Freshman Keri Glad doesn’t only have hopes of returning to in-person school this year — she also has dreams of getting a scholarship for water polo to Pepperdine University or UCLA.

Glad attended St. Clare School before coming to La Salle and has been playing water polo for four years.

She has also participated in rock climbing for 10 years.

Coming into high school, Glad said she was “really scared and nervous,” but after attending orientation sessions in August and being out on the football field in cohorts, “it made me feel better because you still were a part of the community,” she said.

Most of Glad’s classmates from middle school went to Jesuit High School, she said, so she didn’t know a lot of other students going to La Salle. Nonetheless, she said her freshman year so far has been “really good.”

“It’s different moving up from eighth grade because you don’t have the community and I don’t really know anybody in my class, but it’s good so far with all of my teachers and Zooms.”

For Glad, the most challenging part of attending online school has been the breakout rooms.

When going into breakout rooms on Zoom, Glad said that this situation is “kind of awkward because most people know each other and they have their conversations, and so it’s just kind of weird not knowing anybody and not having the community aspect as most people will have with their classmates.”

“It’s challenging with [school being] online, because it’s harder than I expected,” Glad said. “The classes are harder and the assignments are way different than I have ever had before… it’s definitely challenging.”

Outside of tackling online school, Glad is on the Multnomah Athletic Club’s rock climbing team and plays water polo for Lakeridge High School, since it’s the closest high school team to her.

For five months, Glad is a part of a 68 Water Polo Academy in the Newport and Long Beach California areas. “I currently have three five-time olympians as my coaches,” Glad said. “It is so fun, but a handful at the same time.”

Because of this, Glad said she practices for eight hours a day, which leaves her with four hours to complete her schoolwork.

Glad also looks up to her sister Molly, who plays water polo at the University of Southern California. Someday, Glad hopes to compete in the Olympics with her sister for water polo.

Glad wants to encourage her future self to continue to “work as hard as you can and [to not] ever give up,” because “I have a lot of goals that I want to accomplish in my life,” Glad said.