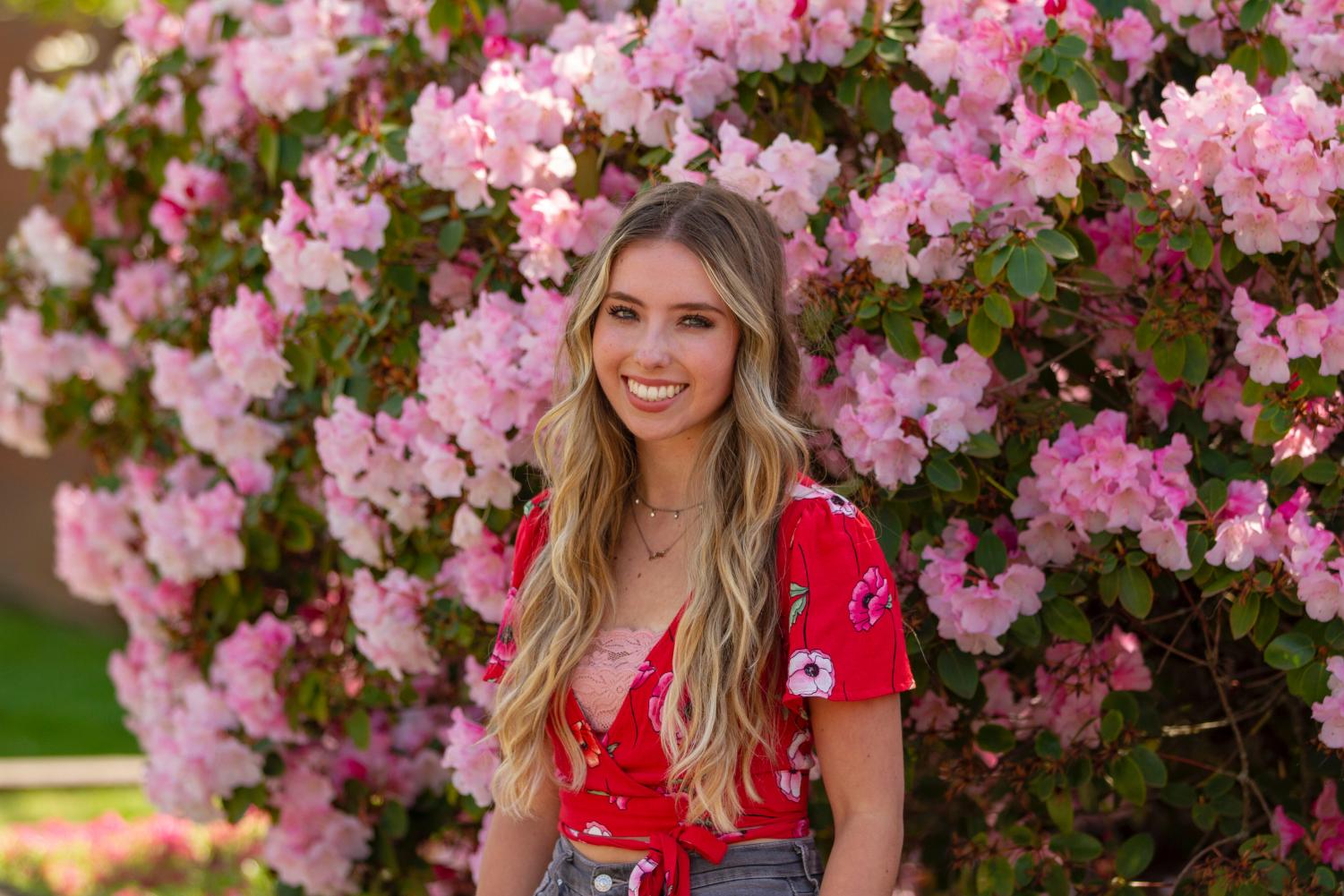 Senior Isabella Griffiths said that although her time at La Salle has been an experience she will treasure forever, she is excited to see what is beyond these brick walls. (Reilly Smith)

Senior Isabella Griffiths said that although her time at La Salle has been an experience she will treasure forever, she is excited to see what is beyond these brick walls.

As She Gets Ready to Graduate, Senior Isabella Griffiths Strives to “Offer Kindness and Love” to The World

Reflecting on her time at La Salle, Griffiths is "so grateful for the memories and everything that I have gained." Now that a new chapter is starting, she is excited and "can't wait" for what is to come.

As a freshman girl, coming off three years of being home schooled, senior Isabella Griffiths was both excited and nervous walking into “the biggest school” she had ever been in.

“My middle school was [at my house], and my elementary school was really tiny,” Griffiths said. “It was nerve-wracking.”

Now that Griffiths is a senior and getting ready to graduate, she said that she has realized how much the La Salle community has affected her life today and how she has created a family here.

In addition to the impact that La Salle has had on Griffiths, many people in the school’s community look up to her and admire her story. “Isabella is definitely one of the strongest people I know,” sophomore Dakota Canzano said. “She always sees the best in others and despite the obstacles in her life, she continues to push through life with the biggest smile on her face.”

“She is a person of faith and she lives her faith in a positive and uplifting way,” said religious studies teacher Mr. Gary Hortsch. “She’s always on the lookout for people who are in need and [she] is there to offer a [helping] hand.”

Going forward, she wants to “have the best four years of [her] life” at college and make her family proud, especially her father, Brian Griffiths, who passed away on Feb. 10 of last year.

As she leaves La Salle behind, and attends Oregon State University in the fall, one of her big goals is to learn more about herself and the world. 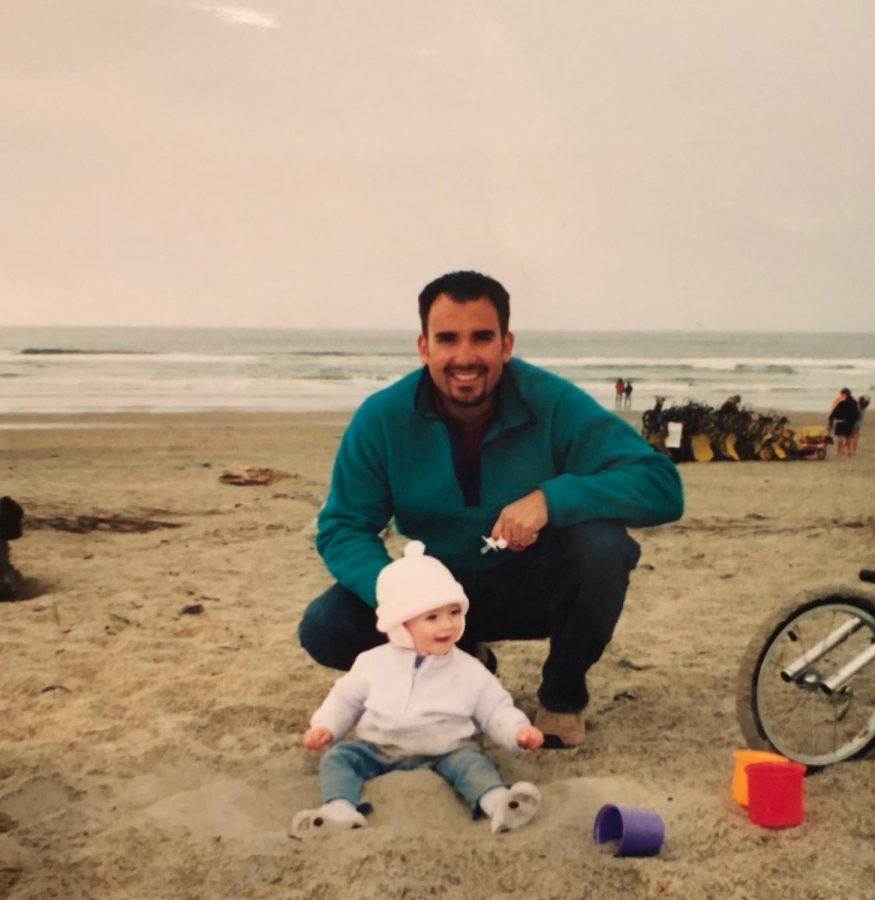 “[When I was younger], I would watch the sunset every night [with my dad in Manzanita],” said Griffiths. “He [would] make the best bonfires. I basically grew up there.”

Finding a Family At La Salle

When Griffiths was a little girl, she loved taking part in family traditions. Soon after she was born, her parents built a beach house in Manzanita, where she would spend a lot of time with her dad growing up. “I spent so much time there and I have some of the best memories of my dad there,” Griffiths said.

However, while in elementary school, especially third through fifth grade, Griffiths was severely bullied. She struggled a lot with this, and so when she sees this happening in any other setting, she “[knows] what it’s like to be in that place where you feel alone.”

“[Being bullied] taught me the importance of treating people with kindness and love and being a friend to people that do not have friends,” Griffiths said.

Because of the bullying that Griffiths experienced in elementary school, her mom decided that it would be best if she was home schooled for three years. Homeschooling was hard for Griffiths because she is a very outgoing person, and so it didn’t feel like the best fit for her.

“I wanted to go to [a real] high school,” Griffiths said.

After the initial freshman anxiety of adjusting to the large campus, all of her nerves melted away as she started to get accustomed to high school. She then realized that La Salle was the high school that she was meant to go to. Griffiths had a lot of things that she wanted to do in her high school career, including becoming student body president one day.

As soon as Griffiths walked into the doors of La Salle, she immediately joined student council and one thing that she recommends to all students is that they take Mr. Doran’s Speech and Debate class early on in their high school career. “[It was] literally the best advice I’ve ever [been] given,” Griffiths said. “Now I can speak anywhere, and all Mr. Doran’s tips have helped me [so much].”

Throughout high school, even as a freshman, she has tried to be a big sister to everyone. “If I see somebody that’s without a friend, I always want to be there for them and be their friend,” Griffiths said.

“Now that I am a senior, it feels like I have another family. The people that I have been able to meet, they’re so amazing. I really [feel] a sense of community here,” said Griffiths. 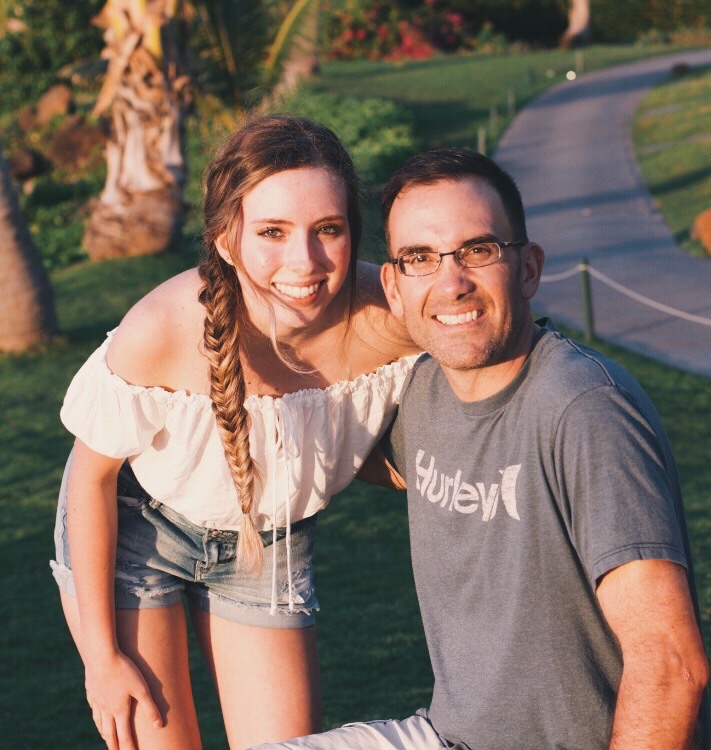 “I break down crying every once in a while because it’s a hurt that’s always going to be there,” she said when talking about her dad. “[But, I know] he would want me to live my life and to never take for granted the people that are in [my] life.”

In Memory of Him

On Feb. 10, 2018, Griffiths’ father passed away after a long battle with cancer. She was a junior, and only sixteen years old. Throughout her father’s life, he had always been there to support her and her brother William, whether it be going to William’s football games or her own academic award ceremonies.

“I [sometimes] just break down and cry,” she said. “It’s so hard for me to accept that these monumental things in my life he won’t be able to see.”

Mr. Griffiths taught her many important life lessons that have helped her become the woman she is today, she said. He always told her that she needed to live her life to the fullest, and because of this, she has realized how short life is.

“I’m so grateful to have found friends that have gone through the same things I have,” she said. “[It helps] realizing that I’m not alone [in] this and that they are not alone either. We can lean on each other.”

Although more than a year has gone by, Griffiths continues to feel the effects of her dad’s absence.

“I’m going to be honest, I still struggle every day,” Griffiths said. “I get mad, sad, frustrated, [and] angry. It’s a whole cluster of emotions. [But I realized that] God never wastes any of our pain. He’s brought people into my life that have helped me to heal so much.”

“I can’t wait until I get to see my dad again,” she said.

More than a year later, Griffiths said that she is doing her best to live her life to the fullest, and that every day, she wakes up and wants to make her dad proud.

“I’ve never seen the vow ‘in sickness and in health until death do us part’ so beautifully displayed in my mom and dad’s marriage,” Griffiths said. “I’m really grateful for my family, [especially] my mom and my brother and the memories that we had with my dad. I’ll always have those forever.” 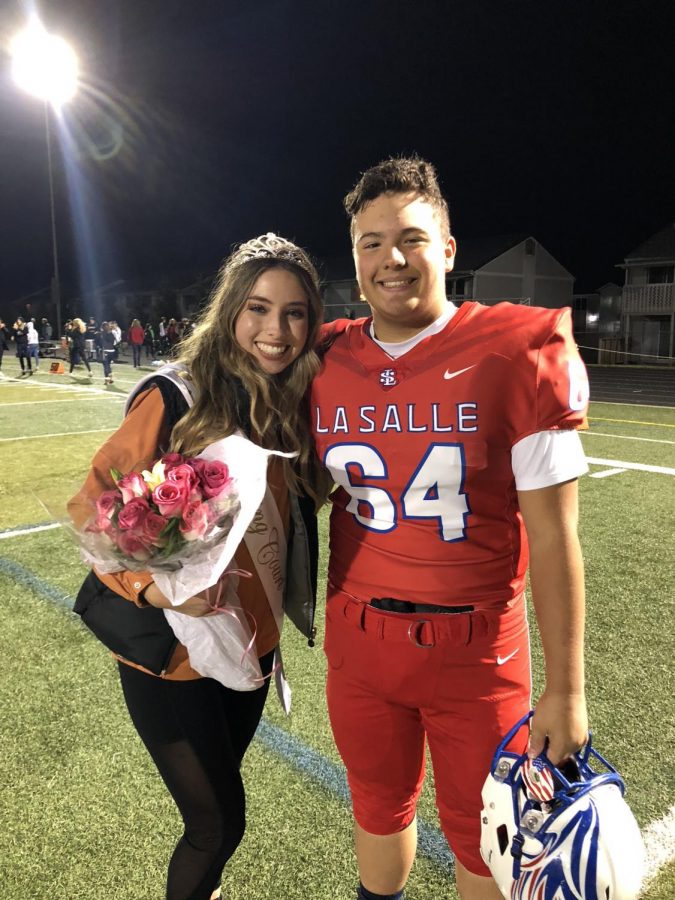 Griffiths and her brother William after the Falcons won over Parkrose during the Homecoming game and after Griffiths won Homecoming queen.

At the end of her junior year, Griffiths ran for student body president for the 2018-2019 school year. And she won.

“[Being] student body president has been one of the most amazing experiences of my life,” she said. “That was a dream of mine, ever since I was younger. It [is] something that was really special to me because it was something that I talked about with my dad.”

When Griffiths won the election, she said that it felt like her dad was cheering her on and that he was watching her with a big smile on his face. Her favorite part about being student body president was getting closer with the members of her executive council team as well as Ms. Banta, Mr. Hortsch, and Ms. Peyton.

A goal that Griffiths had going into her senior year as student body president was to make the dances better.

“I just wanted the decorations to be more exciting,” Griffiths said. “My favorite thing [to decorate] was definitely Homecoming this year. I had so many teachers come up to me this year and tell me that they had never seen La Salle look like that during Homecoming.”

“[It was my dream to be Homecoming queen] ever since I was a little girl,” Griffiths said. “My aunt won Homecoming queen and I used to try on her tiara [when I was little].”

Another goal for Griffiths was to continue being a big sister to others. “As the leader of the school, I wanted to be someone that underclassmen, [and] people in our grade could come to if they needed anything,” Griffiths said. She wanted to be that person that students could approach for advice or even just a hug to brighten up their day. 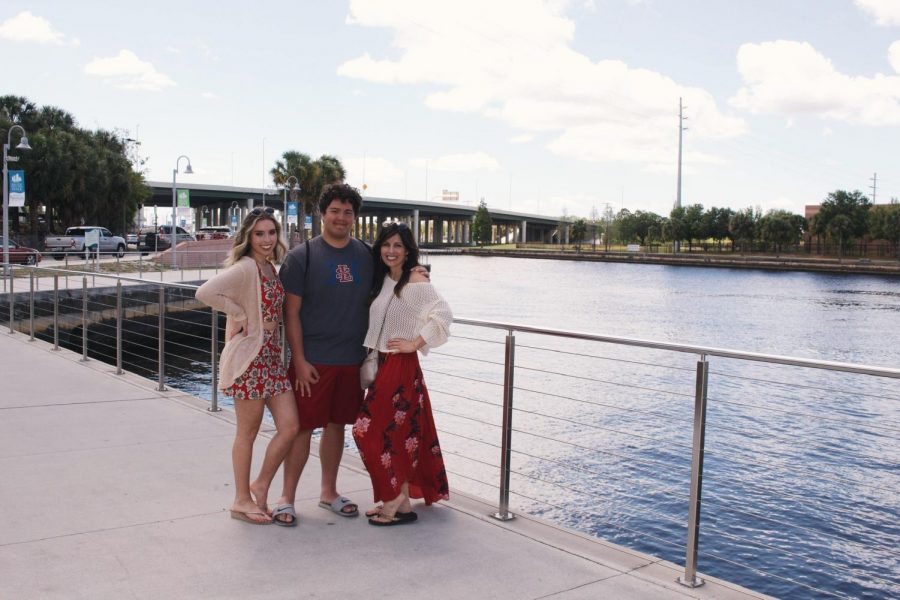 “[My dad] wanted to provide the best life for my mom, my brother and I. He wanted to be the best dad [for us] and the best husband to my mom.”

As Griffiths moves beyond La Salle’s brick walls, she plans on attending the honors college at Oregon State University this fall. She is excited to pursue a bachelor’s degree in kinesiology and become a pediatric occupational therapist for kids with disabilities.

“I’ve always had a heart for kids and people that are often thought of as outcasts,” she said. “I know what it feels like to be without friends and be alone [in the world].”

Aside from her future career, Griffiths wants to join a sorority and cannot wait to meet her future “lifelong sisters.” She also is hopeful that at Oregon State she will meet the man that she will eventually marry.

For Griffiths, going to Oregon State is special because the university is her father’s alma mater. Mr. Griffiths was also a member of a fraternity, and when she visited his old fraternity house, his name and picture were on the wall.

“I couldn’t have chosen a better school for me,” she said. “When I walked onto campus, I could feel him there. To know that he walked those same grounds and that he was there, it’s so perfect.”

“I couldn’t imagine myself anywhere else,” she said.

View Comments (2)
About the Writer 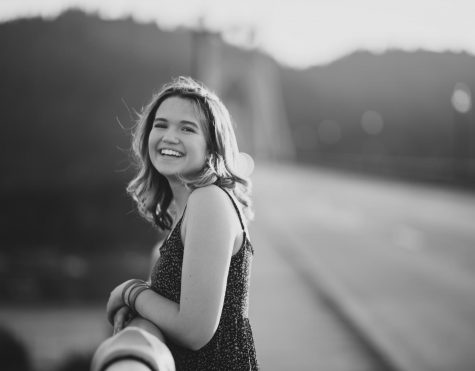 Anna McClow is a senior at La Salle. In her free time, she is very involved in the theater department, and enjoys performing. She has two dog, four cats,...