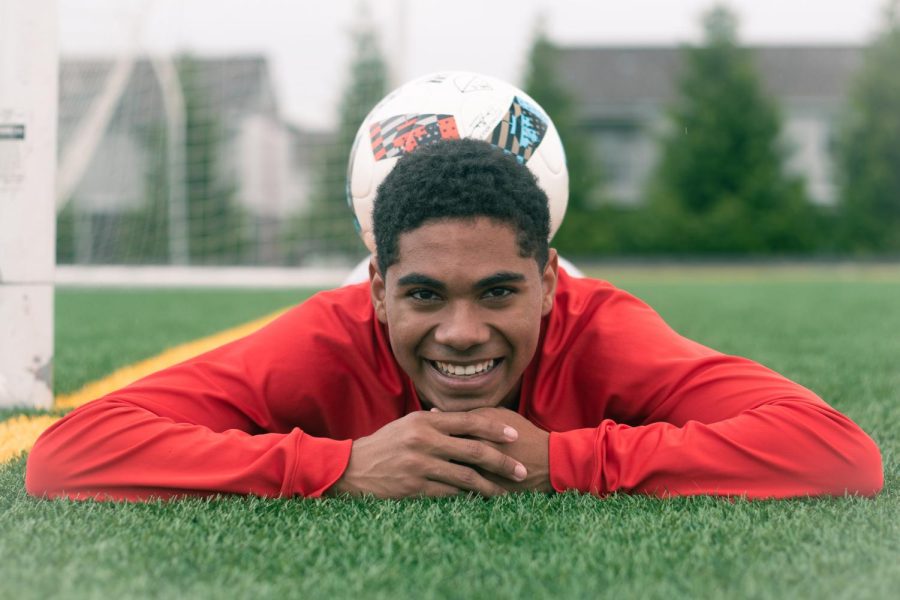 In his free time, senior Mizael Harris enjoys playing FIFA at home, as well as jumping on trampolines. “Whenever I see a trampoline, I have to go jump on it,” he said.

Senior Mizael Harris’ first memories of soccer date back to age three, when he spent weekends playing at the Tualatin Indoor Soccer Arena, as well as lessons on how to dribble from his grandpa.

“I’ve always loved it,” he said. “I think I just really liked playing with my feet. It’s a lot different from other sports.”

Since his introduction to the sport, Harris has gone on to play in three state championship games, travel to Spain to compete in tournaments, and form various connections with coaches and teammates that have only encouraged his love for the game.

Next year, Harris aims to continue his soccer career at Augsburg University in Minneapolis, Minnesota, becoming part of a select group of seniors at La Salle who are showcased in The Falconer’s Next Level Seniors series.

The fields at Tualatin Indoor Soccer Arena where Harris first learned to play have remained in his life, as he has returned to the arena to work as an instructor for younger children. Here, Harris teaches kids how to dribble and juggle, and “basically [tells] kids what to do,” he said.

“When I was three, I obviously didn’t know what I was doing, really,” Harris said. “But as I grew older, maybe when I hit eight or nine, I started to really like it… I guess around that age I started really wanting to play more.”

Harris now plays club soccer for Portland City United, as well as having been part of La Salle’s soccer program for all four years of high school. Now, Harris recognizes Mr. Seth Altshuler, former counselor and head coach of the boys varsity soccer team, as a person of great influence for him.

“He was a little intimidating at first, because he works everybody really hard,” Harris said. “But as I got to know him — and he’s obviously a counselor, too, so it’s really easy to talk to him — he really taught me a lot about what I can do better.”

Even though Mr. Altshuler departed from La Salle at the end of Harris’ sophomore year, during the time Mr. Alshuler served as his coach, “he helped me like soccer that much more,” Harris said. “And also, he always wanted me to go play soccer somewhere else and explore the world.”

While Harris has also played basketball recreationally, forming a CYO team with several friends a few years ago, soccer has always been his main sport. His favorite part of soccer has been “being able to play with my team,” he said.

In times of hesitation about wanting to continue with soccer, Harris said that it was his friends who kept bringing him back to games and practices. Next year, four of Harris’ current teammates will accompany him to Augsburg University to play with him in college.

“I guess going to college is a little bit scary, because I won’t know as many people,” Harris said. However, he predicts that “being able to play with my team and have fun with them” will continue to be one of his most treasured parts of the sport.

In the four years he has played for La Salle’s varsity boys soccer team, Harris has enjoyed participating in team traditions like chants before games, in addition to forming his own pre-game rituals.

Although it is debatable whether or not it has been this ritual that has contributed to the success of the soccer team, the team’s achievements over the past four years are undeniable. Three state championship games and two state titles have made for a memorable high school soccer career for Harris.

“It was pretty surreal,” Harris said.

He remembered being “surprised that I played a lot,” in the state championship game of 2018, “because I was just a freshman,” he said. He recalled scoring two goals in the final his sophomore year, sharing that it was “really nice to be able to have that feeling and share that with my teammates,” he said. And he recounted an “even more surreal” state championship game during his senior year, his last ever game at La Salle.

Soccer has no doubt been a major part of Harris’ experience throughout high school, but he also shared an appreciation for several classes and other activities he has been a part of while at La Salle, including Mr. Mike Doran’s Economics class, Mr. Greg Larson’s English I class, and Mr. Ryan Kain’s Anatomy class.

In college, Harris hopes to study “something in physical therapy,” partly due to his experience in Anatomy. “It is really hard, but I do enjoy the topic,” he said.

As he looks ahead to his future at Augsburg University, Harris will not only bring an array of soccer skills and knowledge from Anatomy and Economics classes, but also life lessons and an eagerness to meet new people.

Harris reflected that during high school, a lesson that has been reinforced for him is that “everybody has their story and you never really know what they’re going through,” he said. “I think being able to respect them and their beliefs and ideology would really help you as well as them.”

In anticipation of next year, Harris is “a little bit scared, but I think I’ll probably enjoy playing soccer there,” he said. He also predicted that “being able to meet new people from all around the world” will be another thing he will benefit from, as “I think meeting people with different background and cultures are really interesting to learn about,” he said

As a final word of wisdom for other students, Harris shared that “I feel like sometimes everything can be really difficult with school, with sports, with family, with friends, relationships,” he said. “But I want everybody to know that’s reading this article, that it’s okay to be in a difficult or struggling situation. As long as you reach out for help from teachers, friends, family — you’ll be okay.”