The La Salle Falconer • May 25, 2022 • https://lasallefalconer.com/2022/05/students-demonstrate-their-talents-in-the-spring-concert/

Students Demonstrate Their Talents in the Spring Concert 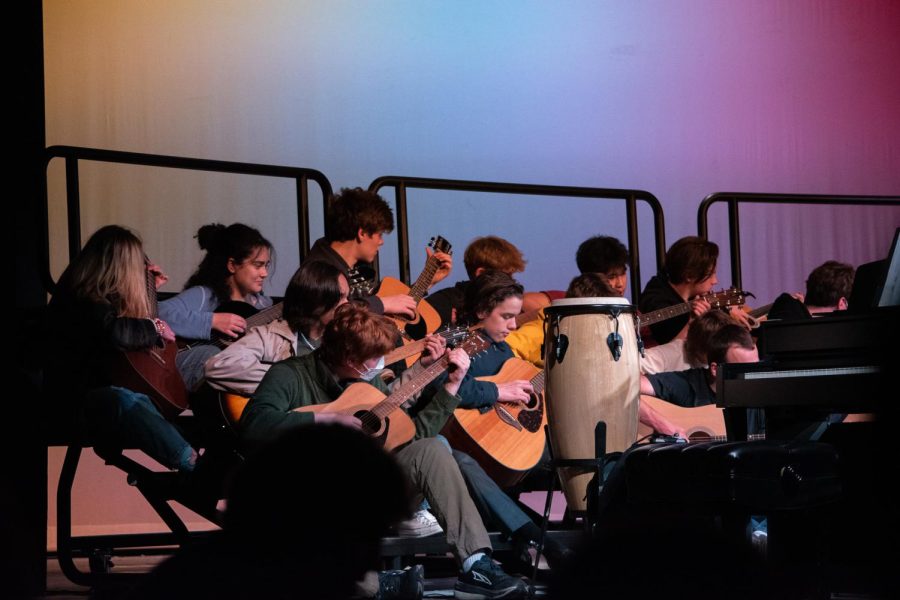 May 16-20 was La Salle’s “Arts Week,” a period of time for the community to gather and appreciate the variety of art created by La Salle students.

On May 18, the school had a flex period so students in Beginning Guitar, Advanced Guitar, Concert Band, Jazz Band, Morning Choir, and Concert Choir could perform using the skills that they have been cultivating over the year, led by guitar teacher and choir director Mr. Otto Wild and band teacher Mr. John Donnelly.

During the performance, senior Gabriel El Youssef performed a song that he composed himself, called “Persuasion.”

“Since it was National Poetry Month [in April], Mr. Wild tasked my Advanced Guitar class with finding a poem to turn into a song,” he said. “I chose my own sonnet, developed a chord progression, and moved some of the words around into two verses, a bridge, and a chorus.”

The concerts during flex time also featured a percussion show from members of the band, who performed the song “Culpa Cups,” but “came up with a few solo ideas that we threw in,” said senior Joe Demers, who is a member of the Concert Band.

The percussion performance used plastic cups rather than traditional instruments. “We decided to play a song like that because we wanted to do something that would be different than just normal band instruments,” Demers said.

Senior Ava Whalon is a part of the Morning Choir class, a group that meets before school each day. “It’s tiring at times, but pays off, especially when we get to share what we have been working on,” Whalon said. “I’ve been in choir all four years at La Salle, and it’s been a really special part of my high school experience.”

Whalon commented that the opportunity to perform has been especially meaningful since the start of the pandemic limited the number of performances that have been possible. “I think we all really appreciate each time we get to perform in a new way now,” she said.