The masks recently deemed the most effective in keeping people safe from contracting COVID-19 also pose a looming threat to the environment. 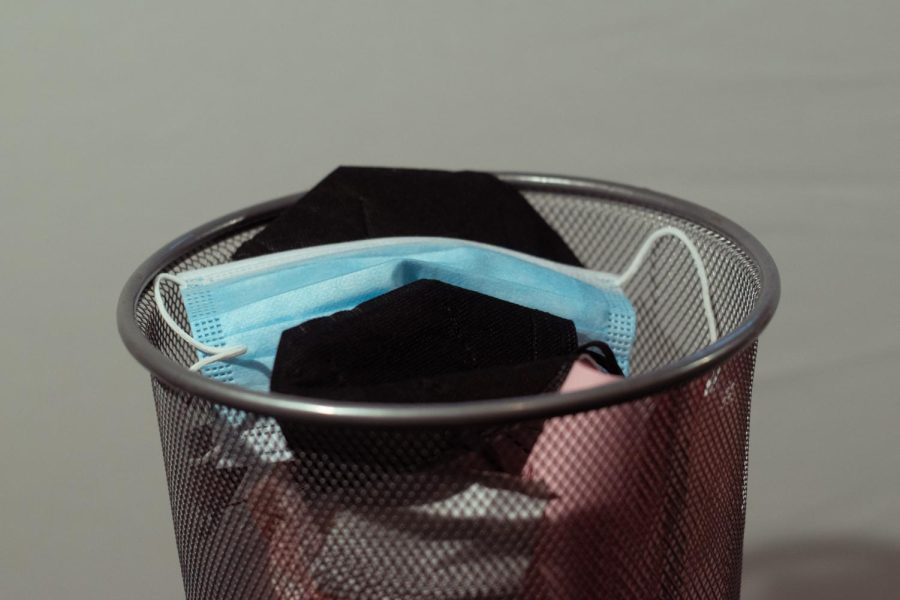 “I think that anywhere you go, masks have sort of become another part of the local litter ecosystem,” senior Hannah Reddick said.

On a park bench, the side of the highway, and even the parking lot of your high school, there is sure to be a disposable mask or two laying on the ground — soggy, dirty, and forgotten — waiting to be rained on, run over, and ignored by passerby who won’t risk touching the possibly contaminated object to discard of it properly.

And from there, the mask is buried by leaves or mud, carried by water or wind into bodies of water, or even picked up and taken to a landfill somewhere. No matter where these masks end up, they will all take an estimated 450 years to fully decompose.

Face masks, disposable or otherwise, have been a constant addition to everyday life for nearly two years now. Just as they have become the new normal, many of them have also become a new source of plastic pollution and environmental harm that wasn’t on the world’s radar before the year 2020, when the use of them became commonplace for many Americans.

But disposable face masks, a necessary and vital part of the pandemic world, are seated in a sort of gray area when it comes to single-use plastic pollution and what to do about it.

Some students at La Salle, who have a variety of reasons for which mask they put on each day — including things like accessibility, comfortability, durability, and fashionability — expressed their own thoughts, uncertainties, and frustrations surrounding the use and disposal of such face coverings.

Freshman Bailey Fronk shared her irritation with improper mask disposal. “It’s usually outside and smushed like people walked on it,” she said. “I think it’s just disrespectful. Just pick it up … like, why are you throwing masks on the ground?”

In 2020 alone, an estimated 1.56 million disposable face masks were found in the ocean, with approximately 129 billion face masks discarded globally each month. These masks, including surgical masks and respirators, are composed of polymers that, when encountered by the elements, slowly but surely break down into around 16 million microplastics per mask.

Senior Hannah Reddick said that she sees disposable masks “pretty often” left outside on the ground or in other places. “I think that anywhere you go, masks have sort of become another part of the local litter ecosystem,” she said. Furthermore, Reddick expressed her dismay toward masks being abandoned outside, along with her own thoughts on actions that could reduce it.

“I think that steps need to be taken to make sure masks are environmentally friendly and can be disposed of safely,” Reddick said. “I just think that it’s really sad that people are just throwing them on the ground because that’s just not fair to the people who live in the area [or] the animals and ecosystems in the area.”

Microplastics are small plastic particles that are less than five millimeters long and are nearly impossible to trap or detect in things like water filters and water treatment plants. And due to their minute size, they have been found to be able to easily maneuver their way nearly everywhere — the oceans, the air, food, and tap water, presenting health risks to not only the planet itself, but also its inhabitants.

Marine wildlife is especially impacted by the disposal of plastic into the environment. Just as images of plastic soda rings around the necks of sea turtles and numerous accounts of dead whales with stomachs filled with plastic products have been representations of the abundance of plastic in the environment, reports of sea life entangled, suffocated, or poisoned by disposable masks that found their way into bodies of water have become a prevalent concern since the start of the pandemic.

Although PPE (Personal Protective Equipment) pollution is a relatively new subject, plastic and microplastic pollution itself is nothing new. A New York Times article from 2015 estimated that eight million tons of plastic makes its way into the ocean annually — a figure now representative of the amount of PPE-related waste alone. And in another, more recent, article from Oct. 2020, the Times reported almost 16 million tons of microplastics residing in the ocean.

In response to the high levels of plastic in the Earth’s ecosystem, a surge of legislation around the world began to limit the use and production of single-use plastics, like plastic bags and straws, by way of taxes or even bans on the products altogether in the early to late 2010s.

While the use of cloth face masks may seem like an easy solution to the environmental threat of disposable masks, they instead present their own threat in the form of low-level protection against COVID-19.

Junior Jackson Chapman said that he usually sticks to wearing N95 masks for this reason. “It’s supposed to, I guess, protect better against COVID, and my parents bought a big whole pack of them,” he said. Chapman also said that he continuously sees masks left out on the soccer field, around the track area, and also in the parking lot at La Salle. “I think it would probably be better for people to have non-disposable masks, just because the disposable masks kind of end up on the ground all over,” Chapman said.

A report released in mid-January of 2022 by the Center for Disease Control disclosed information surrounding the effectiveness of certain masks and recommendations for use, ultimately deeming cloth masks as less protective against COVID-19 in comparison to disposable respirator types — like KN95s, N95s, and KF94s.

Junior Vance Le stated that, while he recognizes that cloth masks would be less wasteful than the disposable surgical ones he frequently wears, he still prefers the latter. “The cloth ones would be better to, I guess, have because you can just reuse them and wash them over again, while [a disposable mask] creates more waste,” he said.

“Is it thick enough? Is it enough to use? Those are some factors that we have to look into,” Le said.

Although there seemingly isn’t a way to get around using disposable face masks at this point in the pandemic without potentially risking one’s protection against COVID-19, there may be ways in which to reduce the overall waste and environmental impact of such masks while continuing the use of the recommended high-quality and approved disposable masks.

The most obvious solution may be to simply ensure that disposable masks are disposed of properly and do not end up littered outside. However, these masks will still inevitably end up in landfills, where the process of degradation into microplastics remains the same. However, reusing disposable masks is another identified solution.

Currently, a guideline for reusing masks is only set for healthcare workers, which suggests around 40 hours of usage can be obtained from one disposable respirator type. However, for those not working in close proximity to COVID-19 patients, and those who use masks in shorter increments, it is thought that this guideline can be expanded to suggest that a person could reuse the same disposable mask for up to several weeks.

Steering clear of washing disposable masks is another way to protect both the effectiveness of the mask and, thus, the number of times it can be used.

Most effective, high-performance disposable face masks are made with purposeful materials that help to safeguard the user from infectious particles entering the mask. And these materials can be made ineffective when met with water or sanitization solutions such as alcohol and peroxide.

A better way to disinfect masks for further use includes letting them hang somewhere with proper airflow or placing them in a clean paper or mesh bag between uses.