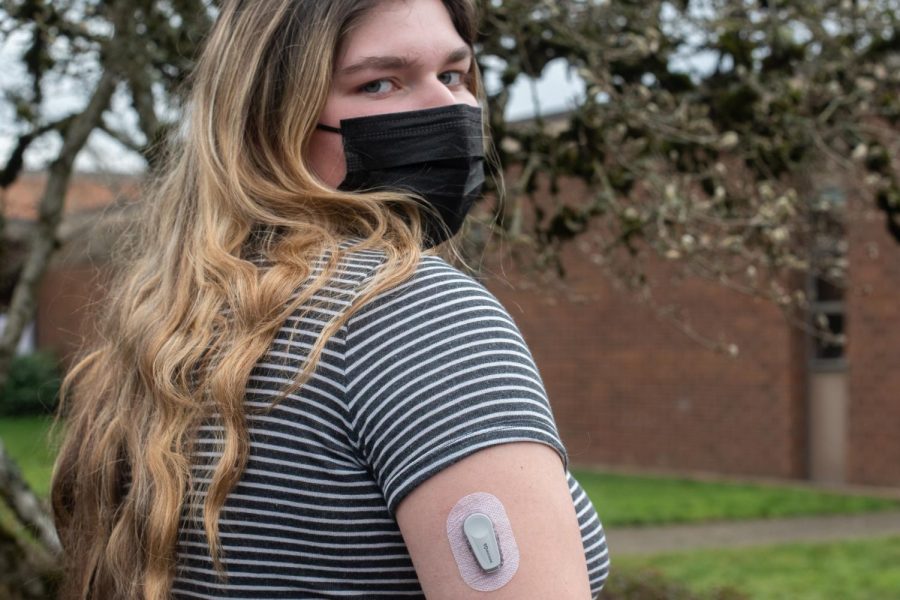 Senior Peyton Stephens uses a continuous glucose monitor that “reads your blood sugar every five minutes and sends those readings to your phone through Bluetooth,” she said.

Type 1 diabetes is a chronic autoimmune disease that affects approximately 1.6 million people — including several students at La Salle. Senior Peyton Stephens is one of these 1.6 million people who will “have it my entire life,” she said.

Diabetes is a condition where the pancreas stops producing insulin, and it is most commonly discovered during childhood and adolescence.

Although both Type 1 and Type 2 diabetes have a similar name and affect many people, they are different diseases. In patients with Type 2 diabetes, the body becomes resistant to insulin, and this type is associated with lifestyle and genetics. Around 90-95% of people diagnosed with diabetes have Type 2.

Production of insulin is important because it “is what takes glucose into your cells to make energy,” Stephens said. “[Which] basically leaves that sugar in your blood, which creates really high blood sugar.”

Since there is no insulin to move glucose into the cells, sugar builds up in the bloodstream, causing high blood sugar.

“There can be a lot of complications with it if your blood sugar is not in range or normal, so it can be very dangerous,” Stephens said.

Stephens was diagnosed with Type 1 diabetes at the very beginning of freshman year, after she had been experiencing symptoms toward the end of summer.

These symptoms, along with others, were present for Stephens leading up to her diagnosis. She “lost 40 to 50 pounds in like two, two and a half months over the summer,” was drinking a “crazy” amount of water, and would wake up with “muscle cramps in my caves every single day,” she said.

Due to the symptoms consistently present at the time, Stephen’s mom scheduled a doctor’s appointment, and Stephens underwent blood tests to find out more information.

Later that night, Stephens and her mom were informed by her doctors that she “needed to go to the emergency room right away,” because her blood sugar was so high.

After the news and diagnosis, Stephens was put on a “standard IV with an insulin drip to kind of work back the insulin I didn’t have in my body,” she said.

During this time in the hospital, she wasn’t allowed to eat because they were waiting for tests to come back normal. “They would come in like every hour and test my blood,” she said, in order to monitor it.

This testing and monitoring is now an everyday task for Stephens. “30 to 40 minutes before I eat, I have to give myself an insulin injection,” she said. This is important because “if I eat without giving myself insulin I risk feeling sick,” Stephens said, due to high blood sugar.

As a way to monitor this, Stephens has a continuous glucose monitor (CMG) located in her arm that reads her blood sugar every five minutes and sends the readings to her phone using Bluetooth. However, this reading can be inaccurate sometimes, so she will test her blood sugar by pricking her finger instead.

This allows Stephens to keep track of her blood sugar, “which is really helpful,” she said.

After her diagnosis she had “a lot of anxiety and stress around it,” she said. Stephens had to miss a lot of school due to doctors appointments.

Stephens also plays volleyball, and as an athlete “I have to be really careful because adrenaline can [be] kind of unpredictable,” she said, and it can lower or raise blood sugar.

If Stephens is eating before practices, games, or tournaments she doesn’t give herself insulin “because it could risk me going too low,” she said.

Nights after long tournaments or activity “are very hard sometimes, due to the excessive exercise and adrenaline,” she said.

Stephens has to “constantly be aware of what my blood sugar is, including during sports,” she said.

When her blood sugar is too low she has to sit out of activity or practice and wait until it is “back into normal range” before returning. To help Stephens’ blood sugar get back to normal, she will eat fruit snacks and drink a Capri Sun, and then wait for around 15 to 20 minutes.

There are many misunderstandings around Type 1 diabetes. For example, “it is not caused by eating too much sugar, but the actual cause is unknown,” Stephens said.

Although she was diagnosed at the beginning of freshman year, Stephens still does not know the cause of the disease, or why her body decided to “attack the insulin cells that I was creating,” Stephens said.

Stephens said she has met a lot of people through her experience that have made her feel supported. Her advice to people recently diagnosed is to not be afraid to reach out to others in your situation, because “it feels good to have that kind of support,” she said.