Student of the Week: Shayden Lough 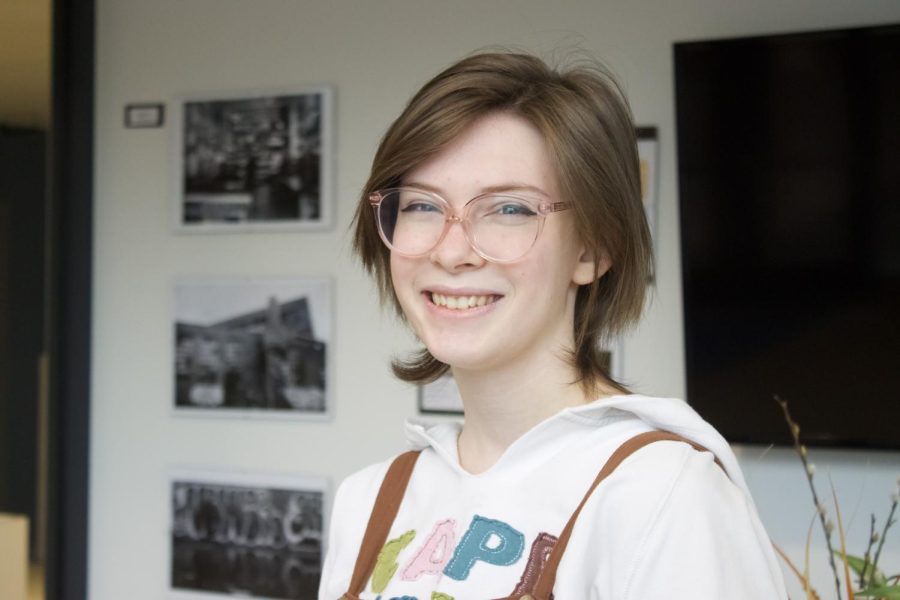 It’s an ongoing joke between the theater crew that senior Shayden Lough “lives there,” they said.

After school, late into the afternoons, La Salle’s theater team is working towards making their next production a reality. When the time comes to get in gear and make something happen, senior Shayden Lough is there to do the job.

For Lough — whose last name rhymes with “tough” — choosing La Salle wasn’t a difficult decision to make, despite considering other schools in the area. “You have a lot more freedoms here,” Lough said. “I just liked it a lot.”

English class is especially appealing for Lough because they see themselves as “a big chatty gal, and it’s my way of learning through listening and talking and communicating with people, so I like the in-class discussions we have there,” Lough said. “And the same thing with World Religions, I really love learning about religions and I think they’re all really interesting.”

Art, singing, and playing instruments are some of their favorite hobbies, but when they started attending La Salle, Lough jumped straight into the scene of theater production. At first, they remained more reserved, but once they decided to step out into the light, Lough said that was when they truly started to shine.

The list of plays Lough has worked on is extensive, as they’re willing to help out wherever help is needed. They’ve aided in different roles on nearly every single production that the school has put on, like a “chameleon,” as they put it. Lough has been in charge of leading several crews within the La Salle theater community. But one moment that is truly a cut above the rest, in Lough’s mind, was during “Alice in Wonderland,” when they took on the role of Mock Turtle, a very sad combination between a calf and a turtle.

“An actor with a big role quit, with two songs, so I took up that too, along with being the head of a crew, and also in charge of all creative control of the show,” Lough said. “And I did it, I made it happen.”

“In the face of trial, I persevered.”

When the pandemic hit, the theater took heavy blows, losing many members and pushing those who stayed into leadership roles without much experience.

“This year, we only have a small handful who can reach into different departments and in different social settings and it’s just been really difficult, but we’re working on it,” Lough said.

One tip that Lough would give underclassmen would be to “go meet other people,” they said. “Don’t be afraid to let yourself shine, because if people know that you are being authentic, then they’ll like you just the way you are.”

After La Salle, Lough hopes to be heading off to college in order to study psychology, learning about sleep patterns and things like insomnia, sleep paralysis, or the meanings behind dreams. Another interest of theirs is anthropology: studying folklore, cultures, and storytelling from throughout the ages.

One thing that they truly want to be remembered for, though, is their heart.

“I really think and pride myself on my ability to care for other people and always just know the right medicine, if that makes sense,” Lough said. “I mean like for a laugh or to let someone cry with you. I want to be remembered for my heart and my little sparkle I bring along with me wherever I go.”