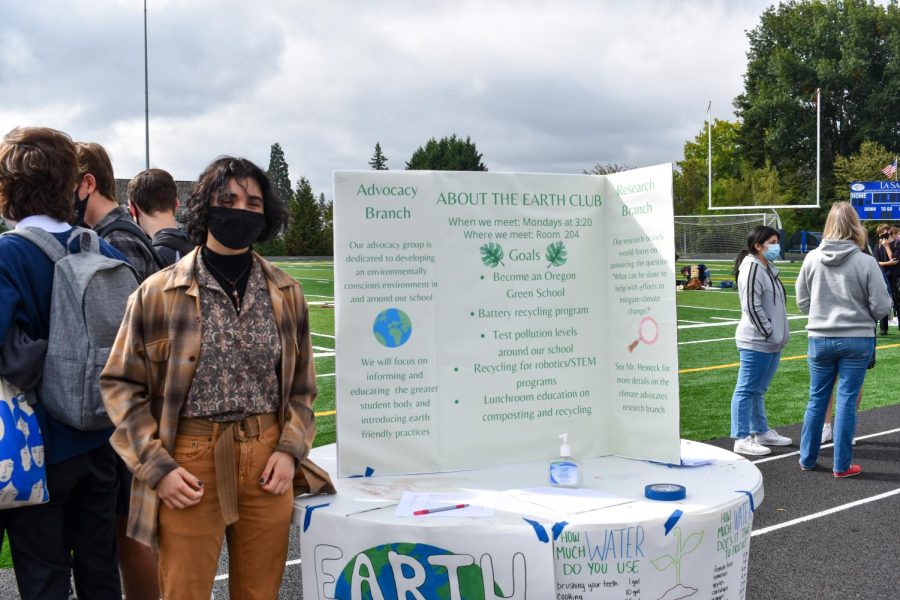 The La Salle Earth Club, led by juniors Sid Lefranc and Isabella Simonutti, organizes projects to combat the local and global effects of climate change by organizing projects that will reduce our community’s negative impact on the environment.

Lefranc has always felt a strong connection to the outdoors and caring for the environment, which is a large reason as to why they felt called to organize the Earth Club.

“I grew up thinking about plastic waste a lot and we’ve always had composts in my home, so it just seemed like a really natural thing to me,” they said.

During their Monday meetings so far this year, the Earth Club has started several initiatives to make the La Salle community more environmentally friendly. Among the club’s current projects are organizing an electronics recycling drive, bringing more vegetarian and vegan options to the lunchroom, making recycling guide posters, and beginning a Bottle Drop account in order to recycle cans and bottles and bring more funds to the club.

According to Lefranc, this week, Jan. 17-21, Earth Club is collaborating with the La Salle Robotics Club and Free Geek to collect old electronics that would normally be thrown away.

“A lot of parts to make electronics aren’t from renewable sources, so we think it is important to recycle and reuse them,” Lefranc said.

The accepted items for the drive are:

However, the items that are not accepted are:

Even if you’re not a part of Earth Club, the club moderators expressed that there is always something you can do to help. Lefranc says the best way to play a role in helping the earth is to “educate yourself as much as you can on how what you’re doing affects the environment,” they said. “People in the U.S. have a really big environmental footprint.”

Lefranc suggests that people should look at the amount of plastic that is being used throughout the day, how much time is being spent driving in the car, and if electronics are left plugged in when not being used.

While the club is student-led, it also finds support in the teachers and administration at La Salle. “They have given really good, constructive feedback so we can keep going on with the plan,” Lefranc said.

Ms. Coleman and Mr. Owen are also a part of Earth Club’s support system as club moderators each playing a role in helping the students make their plans become actions.

Lefranc expressed that another way that Earth Club hopes to have an impact on the La Salle community is by creating a change in habits and values. “I think that what people learn here in high school is what they’re going to do when they’re older, and you learn your values now when you’re a kid,” they said. “So, if it’s on your radar to recycle and treat the earth well and advocate for the environment, then [it’s] like we’re producing citizens that are going into the world and do that”