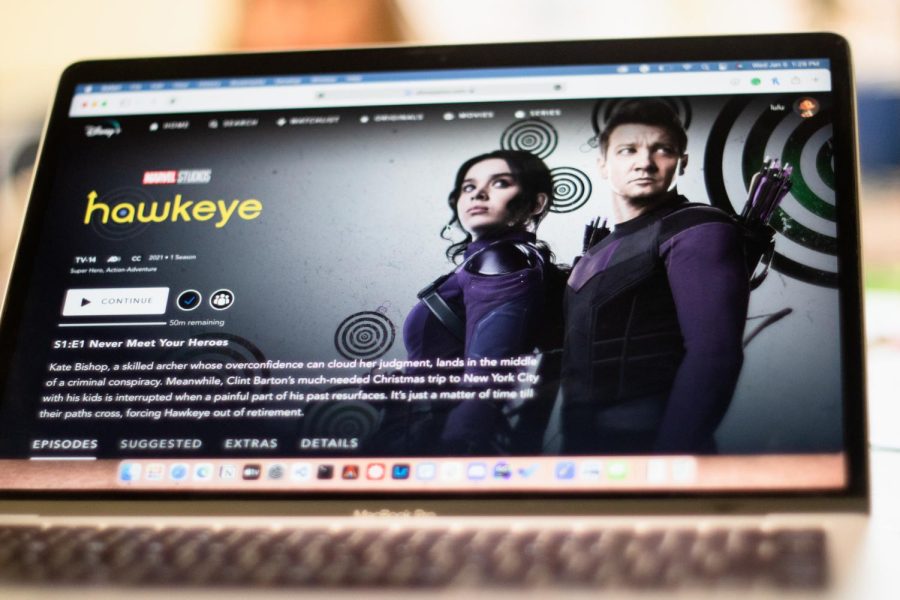 Kate Bishop is a new protagonist of the Marvel Cinematic Universe debuting in the "Hawkeye" TV show.

A new chatty archer, an adored pizza-eating dog, “Rogers: The Musical,” and an infamous mafia who wear tracksuits are all featured on Marvel’s new Disney+ TV show, “Hawkeye.”

Leading up to the release of “Hawkeye,” I was concerned about Hailee Steinfeld in the role of Kate Bishop, not because of her acting abilities, but because she gives me much softer vibes than the ones I got from Kate Bishop in some of the Hawkeye comics.

Nonetheless, upon starting the show, I quickly fell in love with how Steinfeld portrayed the role, her acting performance becoming one of the things that kept me coming back to watch the new episodes every week.

In the TV show, Bishop is less rigid and more quirky than in the “Hawkeye” comics, which added to the dynamic between Bishop and Clint Barton, the original Hawkeye in the Marvel Cinematic Universe or MCU.

Another character from the comics that makes the show is Lucky, a golden retriever that Bishop adopts from off the streets. Even without the context of Lucky being from the comics, having a cute dog whose diet consists of pizza is comedic to watch.

Throughout the course of the show, we get a better understanding of Barton’s character and how he struggles with the praise he receives from civilians. Barton’s inner conflict gave the storyline an incredible and needed depth.

Overall, “Hawkeye” is more of a comfort show than anything else. Much like “Wandavision,” which was the first of Marvel’s many mini-series on Disney+, it has the theme of family woven throughout the story.

Of the mini-series conducted by Marvel and Disney, “Wandavision,” has been a personal favorite. “Hawkeye” was incredible and more enjoyable than other recent mini-series, but not great enough to dethrone “Wandavision.”

Both “Hawkeye” and “Wandavision” featured themes around character relationships, making them comforting to watch, especially with the addition of family-friendly comedy.

When Bishop gets her hands on the Ronan costume, — one that Barton secretly wore during a dark time as a vigilante — Barton is forced to help clean up the mess that she has gotten into in New York while his family is in Missouri, waiting to celebrate Christmas.

After losing five years with his family to the blip, Barton was desperate to make it home so he could spend the holidays with his wife and kids.

Throughout the episodes, Christmas seeps from the TV in the form of snow, holiday music, and the decorations used in the set design.

Watching the show as it aired in the winter, the show’s Christmas-y feel was very entertaining but the integrated ties to the holiday season weakens the show’s rewatchability outside of the holiday season. With all of the Christmas details and traditions in the show, it’d be very difficult to rewatch in spring or summer.

In the pilot episode, Barton attends a musical adaptation of the battle in New York called “Rogers: the Musical.”

The concept and music are extremely cheesy, but Barton’s appalled reactions to the musical as someone who was present during the events being sung about made those scenes comedic gold.

While the Barton family watches the musical, a song called “Save the City” plays featuring a Captain America character belting “I could do this all day.”

Because of characters within the show not taking the musical seriously, as a viewer, it comes off as a genuine performance that they went to watch.

Maya Lopez, known as Echo in the comics, was one of the show’s main villains as a person of power in the tracksuit mafia. Lopez was after Ronan but was unaware that Barton was the one who used to wear the suit.

Lopez and Barton also had a moment where Lopez was able to sympathize with him after learning about his hearing aids since she herself is deaf.

Having villains with backstories is something many shows and movies lack, making “Hawkeye” stand out.

An additional conflict that coincided with the fights between the tracksuit mafia and two archers, was Yelena Belova being hired to assassinate Barton.

During her debut in the “Black Widow” movie, Belova is very similar to Bishop in the sense that they both offer comedic relief for their more serious counterparts, Belova being Natasha Romanov’s, and Bishop being Barton’s. But after Romanov’s death, we get to see a more serious side of Belova.

The character growth was spectacular. Belova continued to be a hilarious and lovable character while becoming more mature.

In “Black Widow,” Belova spent a lot of time making jokes and we don’t see many instances where she is clearly motivated. Although she continues to cause laughter, Belova stays dedicated to her mission with the death of her sister serving as motivation. Additionally, Belova never becomes distracted for too long, and even warns Bishop not to get in her way.

The show culminated with both Bishop and Lopez having a chance to face off against Kingpin, which had different effects and had different levels of quality.

Although Bishop’s showdown with Kingpin was entertaining, and Lopez’s helped to conclude her story, the show didn’t include enough build-up to make the inclusion of Kingpin’s character feel natural.

With only six episodes, there wasn’t enough room to give Kingpin the buildup his character deserves.

The moment Lopez came face-to-face with Kingpin should have been a moment that fans looked forward to rooting for Lopez to get her closure. However, instead of rooting for the character, I was wishing I knew the character more.

Even though Lopez had plenty of screen time, the time Lopez spent on-screen was mainly made up of action sequences and flashbacks that also largely consisted of action.

Despite Kingpin feeling forced into the end, “Hawkeye” was a very entertaining show with several lovable characters and a great holiday feel.