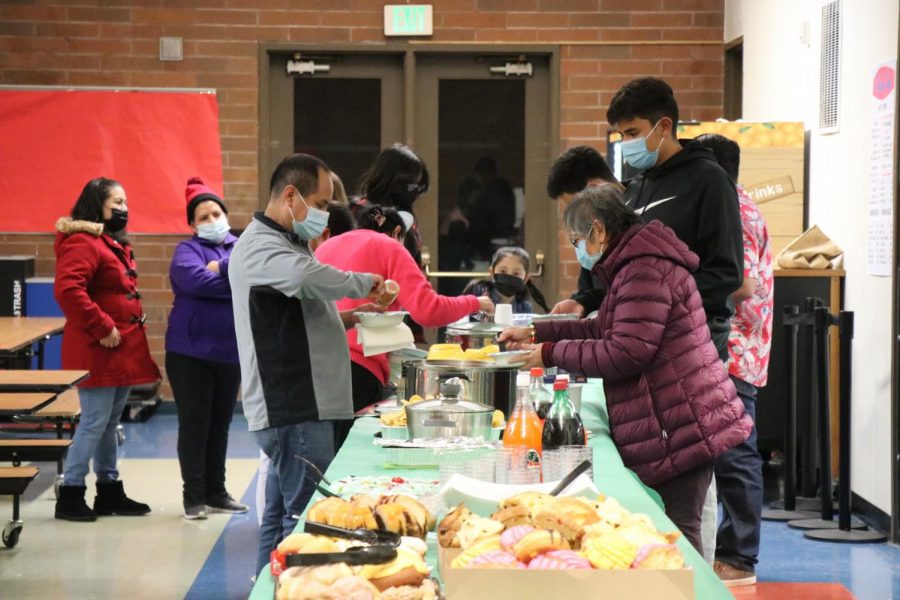 La Posada included traditional food that everyone was able to enjoy.

On Friday, Dec. 10, La Salle’s cafeteria was filled with laughter and music as the Unidos club hosted an event to celebrate La Posada.

La Posada is a celebration that happens from Dec. 16-24, and observes the journey that Mary and Joseph took from Nazareth to Bethlehem.

Although La Posada is primarily celebrated in cities through Mexico, many celebrate it in the U.S. as well.

La Salle’s Unidos club, with the help of counselor Ms. Maritza Mendez, put on an event celebrating La Posada for those within the school community.

Starting at 6 p.m., students, teachers, families, and friends gathered around the two doorways of the cafeteria singing songs while facing junior Sammuel Carrillo, who held a figurine of Mary and Joseph in the inn. “It’s a Mexican tradition where families gather going house to house, reenacting how Mary is trying to find a motel to stay at,” Carrillo said. Since the celebration wasn’t held at a house, they went to both doorways of the cafeteria instead.

After this, everyone proceeded to a long table that had been set up in the back of the cafeteria, which was overflowing with food for everyone to enjoy.

Tables were set up and covered with red and green tablecloths where everyone could enjoy their meals. Festive music was played and everyone socialized with those around them.

Later into the evening, many people began to crowd around the table in the corner admiring the jewelry and rosaries that were being sold by the Unidos club. “It was just a way to fundraise for the Unidos club so that’s where our funding comes from,” said junior Sid Lefranc, who is a member of the club.

Along with helping sell items to help raise money for the Unidos club, they also held a raffle with six prizes. Three of the prizes were handmade piñatas, and the other three were gift cards to a store of the winner’s choice.

The event concluded around 8 p.m. and those who attended were given gift bags as they left.