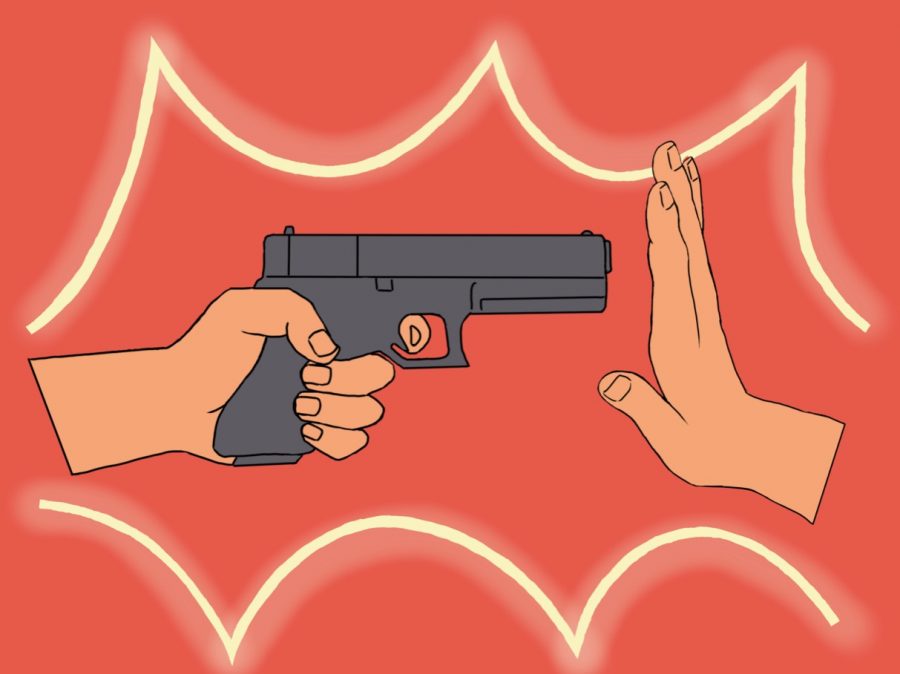 The fight to keep our country safe from lack of gun control will not halt until justice is achieved for the thousands of innocent lives that have been wrongfully taken from gun violence.

Fear overcomes students as they walk into a seemingly safe building. Parents receive phone calls, not knowing if that morning would be the last time they saw their child. The sound of gunshots rings through students’ ears.

57% of teens are frightened at the possibility of a shooting occurring at their school. Non-white students feel this sense of unsettlement at a higher level, with 64% of non-white teens walking into school with a level of concern, in comparison to 51% of white teens.

How many more innocent lives need to be taken for change to happen?

In 2021, 29 school shootings have occurred. With 21 of those shootings occurring since August, it’s clear these numbers are skyrocketing with no end in sight. Furthermore, state and national legislatures have failed to meaningfully address gun violence for both schools and the general public.

Our country is seeing firsthand what happens when gun rights are prioritized over human lives. America needs to wake up. Guns are not being used as protection; they are being used to murder.

As a country, America has a deep-rooted connection to guns. From the country’s earliest years, firearms have been a source of pride and freedom for many Americans. As a rough estimate, around 40% of American adults own a gun or live with someone who owns a gun. Shooting for sport or hunting are widespread activities throughout America. Along with these activities comes the brutal violence that these firearms hold.

As the already appalling situation worsens, so does the need for drastic change. The long-standing cultural connection between gun rights and the American identity has become both toxic and deadly.

78% of gun owners say that carrying a handgun is crucially important to their overall identity, meaning this large number of gun owners carry a gun outside of their homes during some period of the day.

So then, why are guns so easily accessible?

The requirements that need to be met in order to buy a gun are flawed. The federal law requires background checks on any person buying a firearm from a licensed gun dealer. However, this excludes that large percentage of people who buy firearms in private gun sales.

The mass production of guns has created an issue of accessibility. One can purchase a firearm from anyone and anywhere, regardless of whether the purchase is legal or not.

Loose gun laws that allow nearly anyone to purchase a firearm may be a large cause for the uproar in school shootings.

The mental health crisis in teenagers is soaring. Many Americans believe that mental health disorders are what drive these mass shootings and gun violence. Statistics show many of the armed shooters who commit these violent acts suffer from a wide range of mental health issues. It is outrageous that these “mental illnesses” are seen as a violent threat and when mass shootings stand in as the only sort of gun crime in our country.

In 2008, the Supreme Court banned the use of gun ownership by anyone who is mentally ill or a felon. Yet due to the accessibility of guns, students, along with the general public who suffer from mental illnesses are still able to acquire a firearm.

The Second Amendment states, “a well-regulated Militia, being necessary to the security of a free State, the right of the people to keep and bear arms shall not be infringed.”

Many Americans interpret through the Second Amendment that they can use any firearm as they desire. However, it is clearly stated that the Amendment was not intended for free usage of firearms, but rather it was strictly permitting “a well-regulated militia” to use them.

The Amendment, as it is currently interpreted, does not hold up today.

The fight to keep our country safe from lack of gun control will not halt until justice is achieved for the thousands of innocent lives that have been wrongfully taken from gun violence.