The Streak Continues: Boys Soccer Wins State Title for the Second Time in a Row 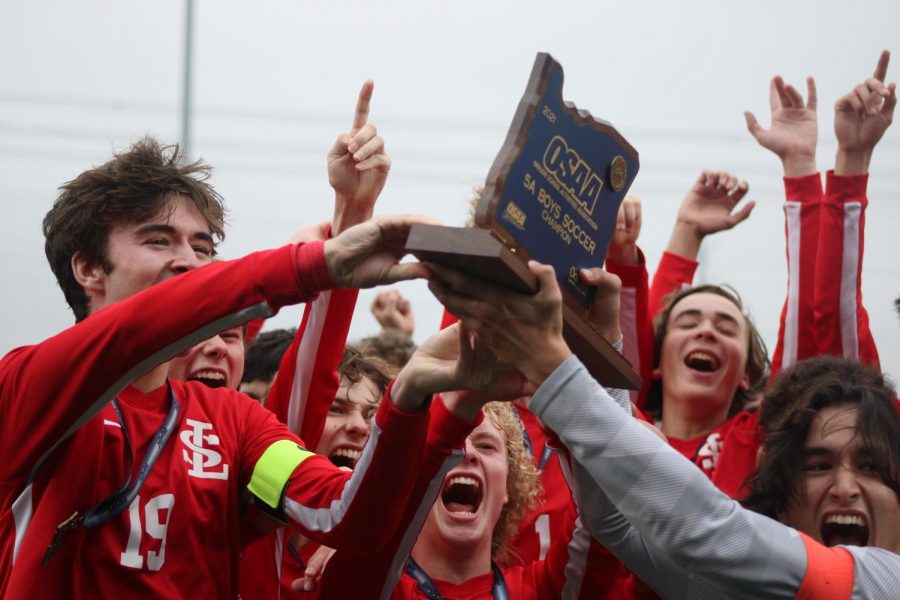 The boys soccer team erupted into cheers upon receiving their trophy.

Before they earned the title of 5A state champions, senior members of the La Salle boys soccer team reflected on their time spent with the program.

Senior Isaiah Melbinger describes his experience on the team as a “family.” Melbinger said that he will remember the friendships he has made on the team.

Similarly, senior Daniel Hartson thought about his time spent with the soccer team. “It gave me an experience with camaraderie,” Hartson said. “I made a lot of friendships with all of these people that I don’t think I would have gotten previously.”

Senior Cam Rast said that this year, the sense of community has been strong “because everything we do is for everybody,” he said. “You can always rely on your teammates, and anyone in the program to help you out.”

Then, after a whole season of preparing, the La Salle team won the 5A state championship game on Saturday, Nov. 13.

#1 La Salle defeated #3 Corvallis High School 5-0 at Hillsboro Stadium. Their season came to a close with 16 wins, one loss, and one tie.

Although the boys won state this year, this is not the first time that La Salle has competed in the state championship against Corvallis. In 2018, the Falcons lost 1-0 in overtime.

Senior Mizael Harris said that the crucial work needed to win Saturday’s game was that “we pushed each other every day during practice and [made] ourselves better,” he said. “We always wanted to try our best.”

Preparing for the game involved dedication at practice. O’Brien believes that a key factor that allowed the team to take their skills to the next level was scrimmaging because “practicing against each other was some of the best competition that we had,” he said.

“After starting off strong during the season, we kind of felt like we were invincible,” O’Brien said. “And, I think getting that loss against Forest Grove kind of helped us just as a gut check, so we were able to make sure we were focused the rest of the season.”

Senior Aidan O’Brien said that the team dynamic on Saturday was “great.” Defending their title from 2019, “there wasn’t as much nervousness, so going back there was just a really fun experience, and we were able to take it in one last time.”

At halftime, La Salle was up 2-0 against Corvallis. To stay in the lead, “I think the most important aspect was just thinking that the game wasn’t over, especially after we scored our first two goals,” Senior Parker English said.

Senior Johannes Gikas felt that a contributing factor to the team’s success was “our drive to keep going,” he said. “We didn’t give up at any point, and that let us have five goals.”

On the foggy turf in Hillsboro, La Salle’s soccer team was laser-focused. “Everybody was just locked in,” English said. “Everybody just put everything aside, and the only thing on our mind that day was to win the game, and we did.”

For Harris, this win was “fantastic.” Having to eventually part ways with 11 other graduating team members, ending the season on a high note was “a great way for the seniors to say their goodbyes, and gives great momentum for the others going into next year.”

The soccer team attributes their strong momentum over the season to their dedicated supporters. To “the ones that came out to every single game, I just want to thank you guys,” English said. “This win was for you.”

O’Brien appreciates the La Salle community and their commitment to support the soccer program. “I know at other schools, soccer isn’t usually a huge thing,” he said. “But at La Salle, especially during playoffs, everyone came out and it was just really helpful.”

Their championship trophy is now on display in the main hallway. “I’m glad we were able to accomplish this together,” Harris said.

Jasper Gilley and Brooks Coleman contributed reporting to this article.