“One Team. One Sport. One Family”: La Salle’s Girls Soccer Team Is Heading To State Championships 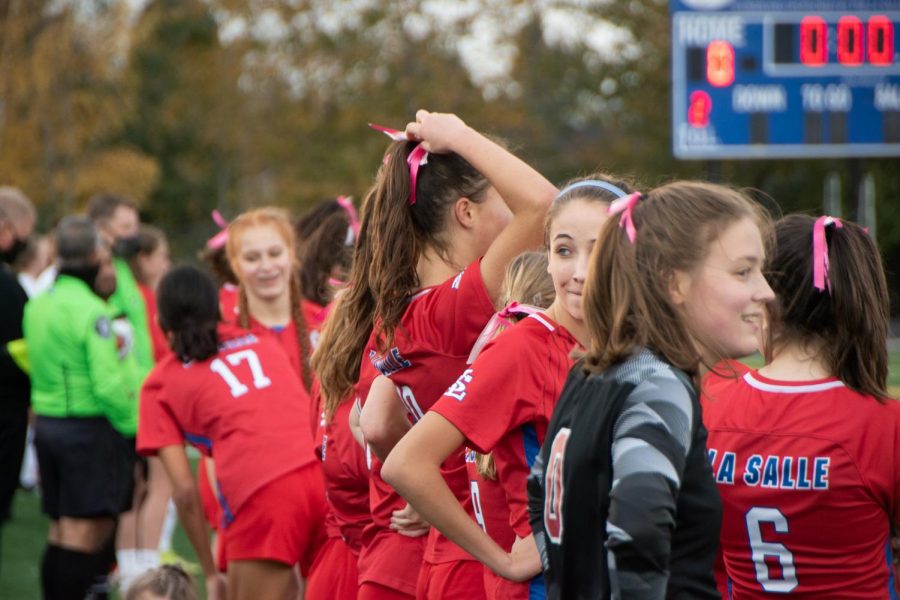 The girls stood at the sidelines before the game as they waited for the game at 3:30 p.m.

As the final bell rang on Tuesday, Nov. 9, the girls soccer team was already in the locker room preparing for the semifinals game starting at 3:30 p.m. that afternoon.

With the music cranked to full volume, using markers to write encouraging messages on each other’s arms and legs, the team exchanged secret sister gifts and prepared themselves for a rain-soaked game against North Eugene.

Most arms were scrawled with “OTOSOF”: “One team. One sport. One family.” Smiley faces and stars were drawn onto the hands and knees of some players.

The nerves were high, but the team’s focus, which was recited multiple times throughout the night, was to have “no regrets,” said freshman Brooke Wilkinson, who plays as a center-back for the team. “It could have been our last game, and we didn’t want to disappoint our seniors or any of us, since we all worked really hard to get to that point.”

Despite the hunger to win, the team spent the first half of the game down 0-1, and the feelings became mixed.

Making matters worse, after collecting two yellow cards for fouls, Pfleger received a red card — taking her out of this game with no replacement taking the field for her. While La Salle had 10 players on the team, North Eugene still had a full 11.

“That made it hard because she’s an extremely sharp forward, and it made me feel like I had to work extra hard, especially for her,” Weber said. “We usually have good passes with each other, and we work with each other to get to those goals, and without her, it was pretty stressful.”

Despite the challenge, “we knew there was still a chance, and that we were a good team,” said sophomore Sofia Gonzalez, who plays on defense for the team.

Still, “it felt like everything was against us,” Pfleger said. Changing their formation, the team covered for the loss as Pfleger cheered from the sidelines.

Then the tides turned, and Weber scored, giving the game a 1-1 tie.

“We all wanted the same thing, and we all worked together to get another goal to tie it, which helped us a lot and gave us back our confidence,” Weber said. “I was so happy because I knew we were back in.”

With the score tied, the clock ran out of time, and the game was forced into two ten-minute sets of overtime.

After that, Warta scored, giving the team a 2-1 lead. “Everyone just came screaming and running to me, and I was so excited, but I knew right away that we still had like 15 minutes left to play,” Warta said.

“Once we scored, we were told, ‘don’t feel like it’s over and that you won it, because anything can happen,’” Marks-Bienen said. Just as that was said, North Eugene scored again — leading the game into another tie, 2-2.

With the new tie, Marks-Bienen was preparing to take on a penalty kick, which was “super stressful.” When two teams are tied at the end of a soccer game that has already gone into overtime, they go into one-on-one shots with the goalkeeper as “the last resort,” she said.

Junior Alison Weber, who plays as a forward for the team, prevented the game from going into penalty kicks by scoring the final goal, making the score 3-2 La Salle.

After they won, “we all got in a big huddle and all cheered, we were so excited,” Weber said. The team celebrated by going back into the locker room and playing “All I Do Is Win” by DJ Khaled.

Because of the win, La Salle’s girls soccer team will compete at state championships this Saturday, Nov. 13. They will be playing at Hillsboro Stadium at 10 a.m.

“I’m looking forward to just being able to be part of a team that makes it to the finals, you know, that doesn’t happen a lot in La Salle soccer history,” Warta said. “All of us have what it takes to reach deep within as you saw tonight, we were able to come back from being behind and get the win.”

The team is going against #1 Wilsonville, whom the La Salle team has been striving to defeat since the beginning of the season.

“I am excited, but also extremely nervous because Wilsonville, obviously, we have not beat in the four years that I’ve been at La Salle,” Pfleger said. “I’m really hoping that we can pull it off because everybody wants it so badly.”