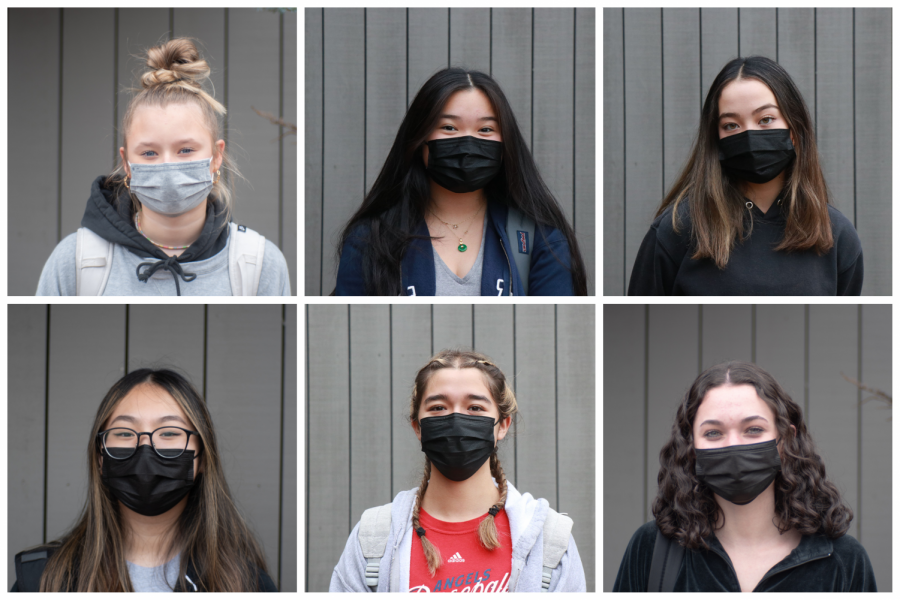 This year's sophomore class has yet to experience a year where they were able to attend in person school for a full year.

After losing half of their 8th-grade year, La Salle’s sophomores have been thrown into an entirely new environment full of new faces.

Six sophomores shared their experience with making friends while being on Zoom, and what the transition back to in-person school was like.

She also used social media as a tool for making new connections. “I think that’s one of the benefits of social media,” Garcia said.

When La Salle was able to return to hybrid in-person learning, Garcia said “it was obviously different with the social distancing, but it was really nice being able to see people again.” Another benefit of being in-person is that she “held myself more accountable for my assignments.”

And with some students continuing online learning through hybrid, “I think the teachers did a good job with teaching both the kids who are on Zoom and in class,” Garcia said. “It was kind of a bummer that we didn’t get homecoming or the other experiences that we missed out on, but I think it was still fun and our class made the most out of it.”

Sophomore Kayley Nguyen had some trouble adjusting to the new high school lifestyle, especially during the COVID-19 pandemic. Nguyen described her change from online to in-person as “different,” and felt as though she was not given the opportunity to fully live out her first year of high school.

“It was really different because I couldn’t really make friends or get the whole experience,” Nguyen said.

Due to COVID-19 restrictions enforced by the state and school, Nguyen was not able to participate in school activities. With the pandemic in the way, not only did Ngyuen not get to attend the activities and events that she was looking forward to, but she found it more difficult to get to know her classes and the students within them.

“It’s a lot of restrictions due to COVID, [and] there was no homecoming last year,” Nguyen said.  “There were not a lot of icebreakers [or] in-person meetings to meet my class formally.”

Nguyen found her transition from online school to in-person school very abrupt. Ngyuen felt that spending most of her freshman year online and suddenly jumping to on-campus school for a month was a very abrupt change. The switch hit her quickly, especially having to be on campus at 8:30 a.m. compared to the 9 a.m. start time she was used to with online schooling.

“I thought it was very abrupt, all online and then in-person every day here [on campus], at 8 a.m.,” Ngyuen said.

Poletiek said that, while online, she didn’t connect with any of her new classmates. “I just became closer with my other friends from previous schools,” she said.

When she did make connections with people, it was during volleyball season. Since volleyball is a combination of all grades, she describes her friend group as “a wide range” varying in age.

During the end of her sophomore year, she was able to finally start high school in person. Poletiek described hybrid learning as “awkward,” considering that you went online for half a week and in person the other half rather than being there every day.

The first few weeks in person, “I literally had no clue where I was going,” she said. Eventually, she figured it out and now feels a lot more comfortable at school.

Last year during the COVID-19 pandemic, sophomore Kylis Li didn’t find online school too horrible. “It wasn’t that bad honestly because I made some friends,” Li said. One downside to being online was that during classes and breakout rooms, “no one really talked,” Li said, making it hard to create solid relationships.

Once she was able to go to school and socialize with people, it made it easier to make friends because she “just talked to other people” during her classes.

Hybrid learning was “kind of awkward,” as Li explained. She said that it was weird to stay home for two days and go to school for two days. On top of that, she was trying to figure out where her classes were, and she described that experience as “really confusing.”

This year she is excited to “make new friends” while also participating in clubs and sports since she was stripped of that freshman year.

Lucy Loeb feels as though her experience with online classes seemed to feel very repetitive.

Changing from spending a majority of her freshman year of high school sitting at home to waking up early and sitting in a real classroom was a challenging experience for Loeb. Although attending school at home was physically easier than attending in person, Loeb felt as though it was not exciting.

“It wasn’t really fun at all,” said Loeb. “We had to do video calls all the time and I thought it was kind of repetitive.”

When asked about the difficulty of making friends over Zoom, Loeb said that personally, it was very challenging for her. Sitting behind a screen and trying to make genuine connections seemed to be a very strenuous task. “The only way you could actually contact people was through social media,” said Loeb. It was “very difficult.”

The actual transition from the online school environment to the in-person physical environment felt fairly easy to Loeb. She did not find it very challenging or stressful, and said that she felt she was slowly prepared to enter the genuine high school experience of attending classes and finding her way around campus.

“It wasn’t too hard, honestly. I feel like it was a gradual buildup to going back in person,” Loeb said.

For sophomore Sarah Doles, transitioning from online learning to in school did not only affect her everyday life, but a change in her grades and understanding occurred. Doles recognized that during online school, she struggled with her grades. Yet, when she went back into in-person school with the on-hand assistance of teachers, her grades changed for the better.

“It was kind of confusing since I did online school, and usually I do better in person. Once we started going into hybrid, I saw an improvement in my grade,” Doles said.

Once Doles was back in school for hybrid, socializing with her classmates and meeting new people in person had begun. For Doles, having cohorts for hybrid learning last semester allowed her to connect and befriend people she had not met before. “Getting to know people that were in your cohorts that you never knew. It was surprising to see more faces and more new people.”

Doles found it somewhat stressful to find her way around the campus for the first time, explaining that it could be confusing at times. “I would just ask people around me and they would usually be pretty helpful,” Doles said.

Doles was able to turn to asking fellow classmates and students around her, usually getting directions from them and giving her the opportunity to create conversation.