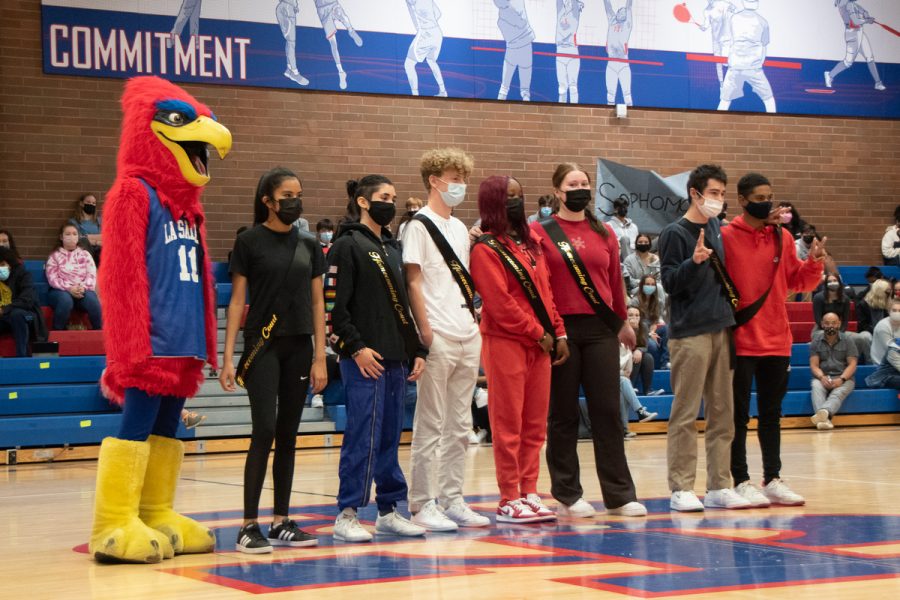 At Tuesday's pep assembly, homecoming court announcements were made by a member of Executive Council.

La Salle’s most recent homecoming dance was hosted two years ago, occurring in the fall of 2019.

But on Friday of this week, La Salle plans to once again host a homecoming dance, with the theme “A Night in Hollywood,” planned by the Student Council. This event follows roughly a year of digital learning during the pandemic, which put a halt to many school events.

“We decided on the theme and then from there, everybody kind of took part in a certain day for homecoming week,” said senior Ella Gach, a member of Executive Student Council.

Sophomore Student Council member Shakira Kahl said that this dance in particular is important because students will be able to “get a glimpse of what high school is supposed to be like.”

Although a homecoming football game typically takes place during the week leading up to the dance, that game has been canceled this year due to injuries on the team.

Since homecoming court is usually announced during the football game, the court was announced this year during two pep rally sessions on Tuesday, Oct. 5.

In addition to the pep rally, school pep and spirit was raised through decorations including stars, reminiscent of the walk of fame, with people’s names on them.

“I really like the idea,” said Violet Sheehan, Sophomore Class President. “That’s a really clever way to be inclusive.”

Playing into the Hollywood theme, teachers have been asked to pick pictures of their celebrity look-alikes that were hung outside of their classrooms throughout the week before homecoming.

As per tradition, spirit week made its return to La Salle for the week leading up to homecoming. This year the themes of activities during spirit week consist of “Sleepless in Seattle,” “Bring it On,” “Clueless,” and “Jumanji.”

On Monday, students kicked off the week by wearing their pajamas to school for “Sleepless in Seattle.” Pajama Day is a La Salle staple for spirit weeks.

Kahl, who helped to plan the dance, looked forward to this themed spirit day the most, excited to just get out of bed and head to school without changing out of comfortable pajamas.

Alongside the “Bring It On” theme and pep rally, Tuesday also featured a film festival activity during homeroom.

The film festival activity involved homerooms competing to do the best recreation of a scene assigned to their grade.

The iconic moment of Simba being lifted up in “The Lion King” was assigned to the freshman class. Sophomores recreated a scene with a setting not too different from La Salle, with the moment when Gabrielle called for Troy in “High School Musical 3.” Coming from another high school movie, juniors recreated the scene from “Mean Girls,” where a girl from the crowd calls out, “She doesn’t even go here.” Seniors acted out the sorting hat scene from “Harry Potter.”

Getting rid of a basic school supply, Wednesday’s theme was Clueless, where students got the chance to use anything they wanted, other than a backpack, to carry their things around. Several students used cat carriers, and there was even a shopping cart used to transport school supplies throughout the day.

Thursday will end spirit week with a “Jumanji” theme, where safari attire is encouraged.

Everyone who plans to attend the dance must test negative for COVID-19. Guests will be asked to bring proof of a negative COVID-19 test or proof of vaccination to the dance.

According to a Schoology post from Mr. Devine, there will be a free on-campus COVID-19 testing clinic administered by Northwest Mobile Testing during flex time on Thursday, October 7th.

Homecoming week will culminate on Friday night, after a day off from school, providing ample time to get ready for the dance, where masks will be required, and Hollywood-themed snacks and drinks such as popcorn and Shirley Temples will be available.

Even though there’s been over a year-long gap since La Salle’s last homecoming, La Salle’s 2021 homecoming has brought back many traditions that were unavailable last year.

Senior and member of the Executive Student Council, Ella Gach missed homecoming last year but is hopeful for this year and wants to make the most of it.