A vs. B, Hot vs. Cold Lunch, and Cafeteria vs. Gym: Students Give Insight Into Lunches at La Salle 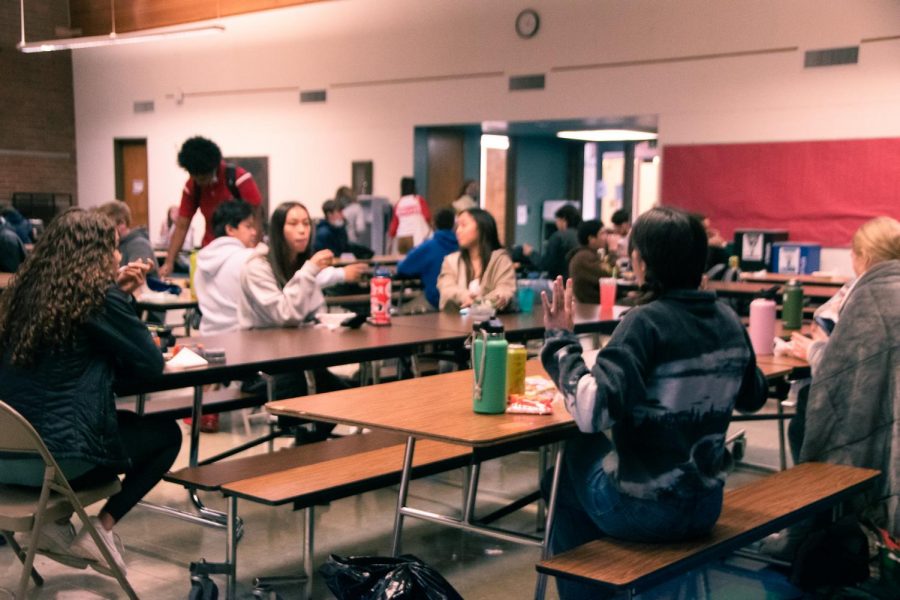 La Salle has two lunches, A and B, which are determined by students' third and sixth-period classes.

After over a year away from the community, we have finally returned to full-time in-person school, but many things have changed, including our mealtime.

What does the new standard for lunch look like at La Salle?

At La Salle, there are two lunches, which are based on the location of your third and sixth-period classes.

The split between the two lunches is a determining factor of many things, such as when, where, and who you eat lunch with.

This prompts the question: is A lunch or B lunch better?

Rowan Bienapfl is a freshman here at La Salle, and said she would rather have A lunch over B lunch.

“l prefer to eat earlier in the day,” she said. “In the class I’ve had during the A lunch time I’d be very hungry and it would be hard to focus.”

Austin Earls, who is a freshman this year, shares a similar opinion about which lunch he prefers. He said, “I’d probably say A lunch just to get it out of the way.”

Nate Broudy, a sophomore, is more undecided about which lunch he prefers.

“That depends on the days where we have really long breaks, then I prefer B lunch because it splits the day up evenly,” he said. “But I do like A lunch to be able to eat quicker.”

It has become apparent that some students like to eat earlier in the day, and A lunch is able to accommodate that.

The lunch that a student has decides the pool of people they are able to choose to sit by. Most people try to sit with their friends, but it really does just depend on what lunch they have on what day.

Beinapfl moves around from place to place when eating lunch, though she says one of her most favorite spots is sitting underneath the cover in the cafeteria courtyard.

Since the pandemic prompted La Salle to introduce new seating options, the cafeteria courtyard and the main hallway have become popular spots.

“We will usually just be outside in the courtyard or up against the wall,” Earls said.

In response to where he sits, Broudy said, “mostly the main hallway. That’s where I find most of my friends that I eat lunch with.”

With the weather getting colder, it may not be as appealing to sit outside. This is why the administration has now opened seats up in the theater. Students may sit two seats apart and every other row to keep six feet of distance.

With a total return to school, La Salle has also been able to bring back school-provided lunches. They offer food like chicken strips, cheeseburgers, sandwiches, and other small snacks.

Students can go online and sign up through Mealtime or bring money before school. The money gets loaded onto their account, and food can be easily purchased, but some students still prefer to bring lunch from home.

Earls, Beinapfl, and Broudy are all some of those people, and said that it is more convenient and easier than getting the cafeteria food.

Although things are getting back to normal in the classroom, lunchtime is still heavily impacted by the COVID-19 restrictions. We still have to sit six feet apart at this time and only in the appropriate seats already set for us.

Even with the restrictions making it hard to have a normal lunch, students are very understanding of why it has to happen.

Broudy is totally in favor of everything that has changed for lunch. “I thought it’s changed for the better because it feels a little bit more principal and like straight forward,” he said. “It definitely makes things easier.”

Lunch is definitely not what it used to be, but students of La Salle are making the best of it.