The La Salle Falconer • May 26, 2021 • https://lasallefalconer.com/2021/05/next-level-seniors-victoria-azar-plans-to-hit-the-ground-running-next-year-at-george-fox-university/ 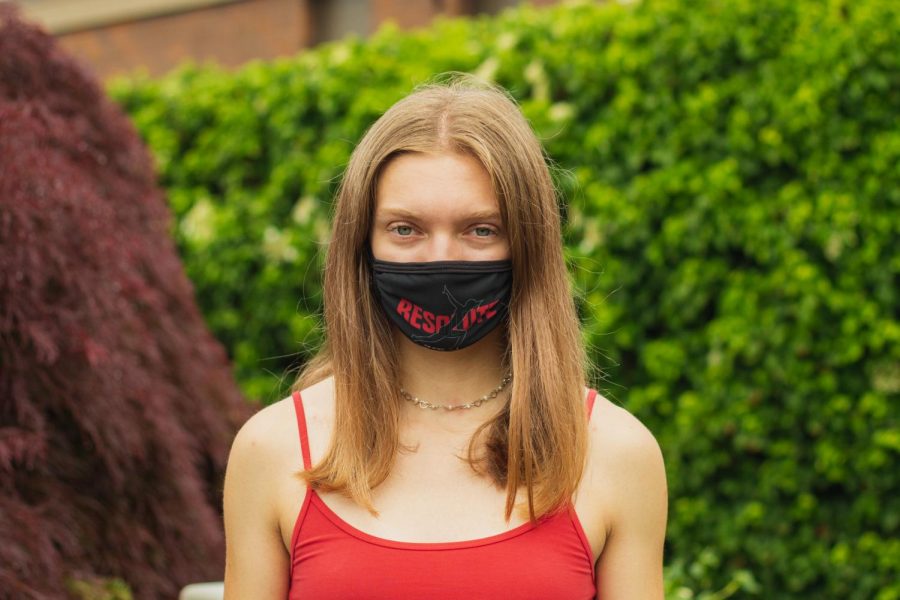 It was senior Victoria Azar’s freshman year, and she was at the peak of her first track and field season with La Salle, competing in varsity events, with her relay team hitting their stride — and then a stumble at practice led to a broken foot.

“It was just one of the worst things that could happen, especially at the height of the season,” Azar said. “I had three track meets that week.”

Azar’s injury forced her to learn “how to cope with an injury and how to recover,” she said. “I guess I just learned how to deal with it… I went to physical therapy every day pretty much, and then I was able to do cross country that fall.”

Three years later, Azar has committed to participate in track and field for George Fox University at the Division III level. She is part of a select few seniors at La Salle who have signed to play sports at the collegiate level, students The Falconer showcases in its Next Level Seniors series.

While at George Fox University, Azar plans to major in biology and has hopes of becoming a physical therapist, partially influenced by her experience attending physical therapy herself after she broke her foot.

Although Azar is eager to begin studying biology and participating in track at George Fox, she will take with her an abundance of memories, lessons, and accomplishments gathered over the course of her four track and cross country seasons at La Salle.

“A personal memory for me that was just one of the highlights of my track career has been my sophomore year Twilight meet,” she said. “I competed in long jump, but I set a PR of seventeen feet, and I got 8th place.”

Another cherished memory for Azar was “going to state my sophomore year with everybody,” she said. “It was just pouring rain, but we all had a good time because I went with two relay teams.”

Azar has also travelled to meets outside of the state with her club track and field team, going to Boise, Idaho twice and also attending nationals in Sacramento, California with two of her relay teams.

It wasn’t until this year, however, that Azar got the “best news ever,” when she learned her relay team with La Salle had won first place in state, a major accomplishment for the team, she said.

In addition to the array of achievements Azar has acquired over her years participating in track and field, Azar said she will reflect fondly on the many memories she has made with her teammates during her time at La Salle.

“One of my favorite things about track is the fact that people are always so nice,” she said. “It’s individual, but it can also be a big team event, because everybody’s really working on their own skills. You can respect everybody’s individual effort.”

Azar recounted several traditions and even a few superstitions that the track team has developed during her time at La Salle.

“In track, you never want to drop a relay baton,” Azar said. “If you drop a relay baton, you always have to do some sort of ritual to make the bad vibes go away… Sometimes we pick it up and drop it again so that we will have dropped it twice, and apparently that will fix things.”

This lighthearted superstition is not the only practice Azar’s coaches have implemented for the team.

Azar has also gotten into the routine of mentally preparing for her events before they begin. Since she normally participates in shorter events, “it really takes a lot of focus and planning and knowing exactly what to do,” Azar said. “Before meets and such, our coaches always tell us to visualize events, and I just feel like, while it may be important in other sports, it’s especially important in track because you only have a few chances.”

Azar’s journey in track and field has prompted her to recognize several life lessons that she has applied to interests outside of athletics as well.

“I’ve had anxiety around track before,” she said. “I feel like if I go out and run, maybe I won’t do as well as I want to, [and] it’s like the end of the world. But it’s not — it’s okay to fail and go out and try again. So I think my coaches have just taught me that it’s okay to maybe not do your best, as long as you really are pushing yourself to do your best.”

Since Azar is involved in AP Studio Art and Advanced Art 2D at La Salle, she said she has put this understanding into practice with art projects and school assignments.

Looking ahead to her future at George Fox, Azar is expecting that “being an athlete in college is going to be difficult,” she said. “Because I’m taking all these college level courses, and I’m also competing in track in the spring and probably working out in my off season, so I’m just going to have to become a good time manager.”

“I’ll definitely take my skills of balancing track and academics from La Salle into college,” she said.

As a general goal for her athletic career beyond high school, Azar said she hopes to focus on improving her current personal records at George Fox University.

“My goal is probably to jump eighteen or nineteen feet, and then run a sub one minute 400 meters,” she said. “And then after I achieve those goals, I can set new goals. I really just want to work on improving what I have.”

Ultimately, throughout Azar’s track and field career — including several ups and downs, and periods of injury and recovery — she has always loved the sport.

Azar is excited to continue her track and field journey at George Fox University next year. “It’s just gonna be an overall great experience,” she said.