The La Salle Falconer • May 26, 2021 • https://lasallefalconer.com/2021/05/bsu-and-world-religions-students-host-prayer-service-to-memorialize-victims-of-police-brutality/ 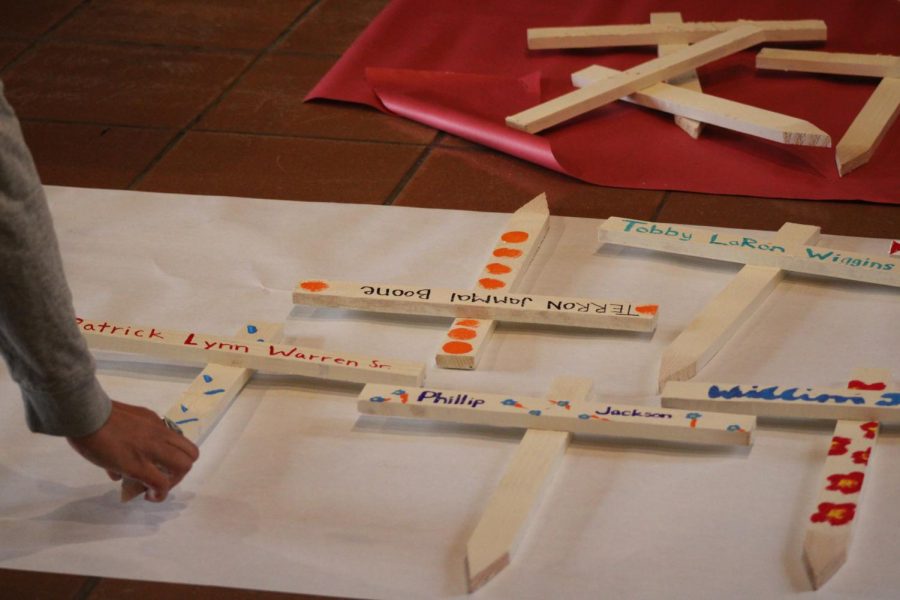 BSU and World Religions Students will host a prayer service on Thursday, May 27 to pray for people of color who were killed at the hands of police in 2020.

After months of planning, a prayer service will take place in the academic courtyard to remember and pray for men and women who were killed at the hands of police in 2020.

The Cross Project prayer service will take place on Thursday, May 27 at 3:15 p.m., and includes more than 130 crosses, each of which display the name of a person of color who was a victim of police brutality.

The original idea behind the Cross Project came from a La Salle immersion trip at the United States and Mexico border. On the immersion, students and staff learn about the dangerous journeys people take to cross the border into the U.S.

While near the border, an organization called No More Deaths invited the La Salle group to participate in a memorial for the many men and women who passed away during the journey across the border through the desert.

The students and staff on the immersion helped paint crosses, write names, and learn about the stories of those who passed away while crossing the border. For the protest, participants stood in a line, then stepped forward one by one, saying the name of the person whose cross they held and placing the cross along the side of the highway.

“I know for me, personally, it was very, very powerful,” English teacher Mr. Chris Krantz said, who has been attending the immersion since 2003.

When discussions began in January about how the La Salle community would celebrate Black History Month during February, Mr. Krantz brought up the idea of doing their own version of the crosses, but instead focused on people of color who have been killed at the hands of police.

While the project was pushed back from the original date during Black History Month, members of the BSU and students in religious studies teacher Mr. Tom McLaughlin’s World Religions classes continued the conversations and organized a prayer service for a later date.

For a few months, the crosses were laying in a storage closet on campus, but Mr. McLaughlin, often called Mr. Mac, brought them to his classroom in April, displaying all the crosses throughout the room so students could stop and look at each one.

In his classes, Mr. Mac discussed the crosses, who was named on them, and why their names were included. He opened the floor for classwide discussions about what the crosses mean to students individually, and offered students the opportunity to ask questions they had about the project.

World Religions classes also discussed how this project connected to their curriculum, tying it to different religions that they were studying. “Some of those conversations led us to talk about concepts from World Religions that show up here,” Mr. Mac said. “Each of these crosses, for instance, represents a clashing of karmas, from the Hindu tradition.”

Mr. Mac said he was impressed with the students’ written responses to the surveys. “When I was reading what students wrote, what I saw was that the ideas that were coming out didn’t come from our conversation in this classroom, they were reflecting four years of Lasallian education,” Mr. Mac said.

Senior Ben Scott-Lewis is a student in Mr. Mac’s World Religions class who participated in the project, as well as the classwide conversations that occurred.

“We had some pretty emotional discussions about racism,” Scott-Lewis said.

Mr. Mac said he feels that the project aligns with the Lasallian values that the community strives for through the banners that hang in the main hallway.

“It’s difficult and it brings up a lot of emotions, but it’s consistent with our values,” Mr. Mac said.

Given that La Salle is a Catholic school, those involved with the project said that participating in a prayer service could be beneficial and powerful to the community. “We believe in the power of prayer,” Ms. Maher said. “We believe in God’s presence being in really hard conversations and situations.”

Junior Nyah Torbert, who is a member of the BSU, said that the project is important for La Salle as a Catholic school to “remember that we have to respect the dignity of every individual,” she said.

Ms. Mounsey also emphasized that the project’s main message is “recognizing the sanctity of human life, and that everybody deserves to live,” Ms. Mounsey said. “It’s just a way to prayerfully uphold and reflect upon what has happened, and is currently happening, and continues to happen.”

Mr. Mac said that the project recognizes the unity between individuals in a community, and the effect that some people’s suffering can have on others.

“We are a single body, whether we recognize it or not,” Mr. Mac said. “All of the wisdom traditions tell us that we are, all of the science shows us that we are interdependent, we are interconnected. So if you’re hurting, I’m hurting. I may not know it, but I am. So this country is hurting, and that actually has been really clear over the last year, since the murder of George Floyd. We’ve seen this country rocked, and there’s a lot of hurt going on right now, and not just in the community of people of color — white people are hurting too.”

Ms. Mounsey said doing research for the project has evoked different emotions for her.

“I just have to be careful to make sure that I’m taking care of myself,” she said. “It can be really hard and emotional so it definitely strikes a personal chord with me.”

Ms. Maher said that she was “very supportive of having a visual representation on campus” and believes if the La Salle community can step out of their comfort zone, “I think that could really open up some conversations for even the larger community to talk about this, especially when it comes in terms of being Catholic and Lasallian,” she said.

At the event on Thursday, participants will not only share the names that have frequently circulated in the media — like George Floyd or Breonna Taylor — but will also focus on the men and women that fewer people know the names of. “Not everybody knows who maybe Daunte Wright or Stephon Clark is, and so [we’re] kind of highlighting the people whose stories haven’t been shown in the media very much,” Ms. Mounsey said.

When all participants have left the courtyard after the prayer service on Thursday, Scott-Lewis wants people to “walk away saying, ‘I’m proud of my school,’” he said. “‘I’m proud of my community. And I want to keep making statements like this, of the dignity of Black life.’”