Taylor Swift Makes Waves in the Music Industry As She Re-Records Her Sophomore Album, “Fearless” 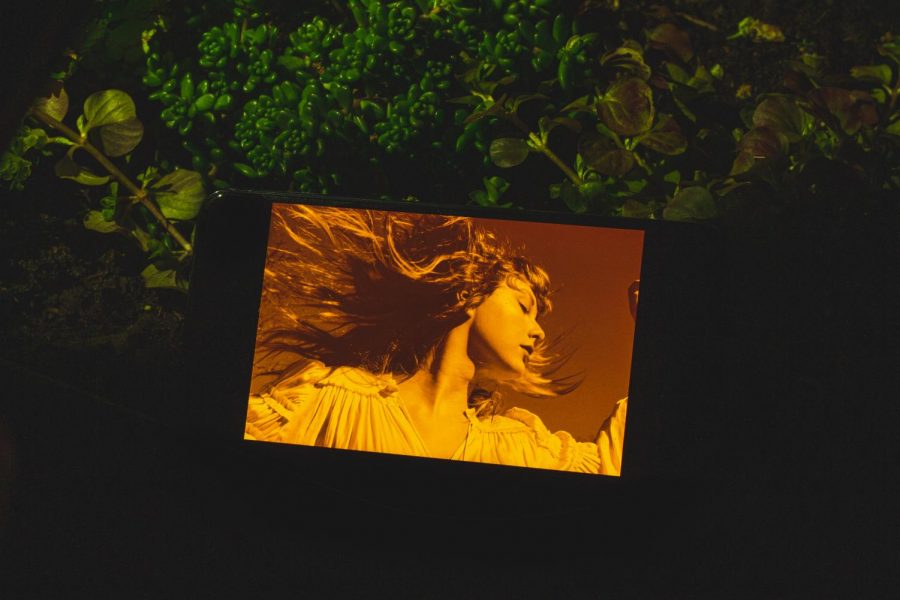 The re-recorded album "Fearless" has 26 songs in total, including the deluxe tracks as well as six new songs from what Swift calls, “the vault.”

Taylor Swift is currently one of the biggest names in the music industry. She is known for her songwriting and many hits that she has made over her 15 year long career.

However, if you haven’t been keeping up with Swift’s music career, you may be surprised to find that last Thursday she re-released her second album, “Fearless,” seemingly out of nowhere.

But there is an explanation for this, and it is one that uncovers a dark side of the music industry.

In 2006, Swift became the first artist to sign to a new up-and-coming music label called Big Machine Records that was owned by Scott Borchetta. That same year, she released her hit song “Teardrops On My Guitar” and her self-titled debut album.

Then in June of 2019, Scott Borchetta sold Big Machine Records to Scooter Braun for $300 million dollars.

After the news of the sale of Big Machine dropped, Swift took to social media to make a statement revealing that she did not own the rights to any of the music she had made from 2006 to 2018.

“For years I asked, pleaded for a chance to own my work,” Swift said. “Instead I was given an opportunity to sign back up to Big Machine Records and ‘earn’ one album back at a time, one for every new one I turned in. I walked away because I knew once I signed that contract, Scott Borchetta would sell the label, thereby selling me and my future. I had to make the excruciating choice to leave behind my past. Music I wrote on my bedroom floor and videos I dreamed up and paid for from the money I earned playing in bars, then clubs, then arenas, then stadiums.”

Swift continued to explain how betrayed she felt by the sale of the label and thereby her music to Braun, claiming that she had received “incessant, manipulative bullying I’ve received at his hands for years.”

Swift also claimed in this Instagram post that she was not given the opportunity to buy her music from Big Machine Records.

Then, a week later in a CBS interview, Swift revealed that she would be re-recording all of her previous six albums so that she could finally own the rights to them, even if they aren’t the original.

In 2020, Scooter Braun put the Big Machine Records label up on the market to be sold.

This led to Swift’s release of another statement, where she claims that she tried to get in on the bidding for the record label, but Braun and his team told her that they would not allow her to make a bid unless she signs a non-disclosure agreement that would prohibit her from further talking negatively about Bruan and prevent her from talking about trying to own the rights to her music.

Swift said she refused, since signing the NDA would not guarantee her ownership of her own music and would prevent her from talking about an issue that affects many artists.

Shamrock Holdings Record Label then bought Big Machine Records and reached out to Swift to see if they could reach an agreement, since for Swift to re-record her old albums would drastically devalue the originals.

Swift claimed that she was open to partnering with them, but learned that Braun would still be making money off of her old music due to the nature of the contract that Shamrock Holdings had signed.

This then brings the issue to April 2021, with Swift now having dropped her first re-recording of the album “Fearless.”

The re-recorded album has 26 songs in total, including the deluxe tracks as well as six new songs from what Swift calls, “the vault.”

This newly re-released album is one that I’ve heard 100 times over, and in my opinion, it sounds the same as the original — hearing the songs again with Swift’s stronger and more mature vocal performance only enhances the overall perspective.

Of the six new tracks, my favorites are “Mr. Perfectly Fine,” “We Were Happy,” and “Don’t You.” However, “That’s When” and “You All Over Me” are amazing as well.

“Mr. Perfectly Fine” is a catchy song that I find getting stuck in my head. This song was clearly written while Swift was a teenager shown by petty undertones within her lyrics and meaning, but the song still has the strong writing that she has always possessed.

“Mr. Perfectly Fine” is a song about being sad after a breakup but seeing that your ex seems completely unaffected by the change. Although that might sound sad, the song’s instrumentals have a clear rock element that makes the song more upbeat.

One of my favorite aspects of the song is how it opens with her saying everything that her ex had told her. For example, “Mr. Here to stay/ Mr. Looked me in the eye and told me you would never go away/ Everything was right/ Mr. I’ve been waiting for you all my life/ Mr. Every single day until the end I will be by your side.”

Nothing makes me sing louder than the beginning of the chorus where Swift belts out “Hello Mr. Perfectly fine/ How’s your heart after breaking mine” — plus, the genius behind the fact that in the last chorus Swift changes the “hello” to “goodbye” makes this a petty masterpiece.

“We Were Happy” is a song that details falling out of love with someone even though you don’t want to.

Swift describes all the plans they had made together and how she doesn’t understand how the feeling is fading because they were happy.

Perhaps the lyric that most perfectly captures this is, “I hate those voices telling me I’m not in love anymore/ But they don’t give me choices and that’s what these tears are for/’ Cause we were happy.”

“Don’t You” portrays the pain that comes with running into an ex who doesn’t seem to share the same heartache and pain about the split. Swift describes how she can’t seem to understand how her ex can be doing just fine, while she’s heartbroken.

While “Fearless” is the first album to be re-recorded and released, Swift still has five more albums that will most likely be released at some point in the years to come.

Swift, as one of the biggest names in music, has no doubt set a precedent by starting to re-record all of her old albums. Since most artists in the industry do not possess the rights to their own music, it is possible that re-recording will become something that a lot of mainstream artists might do in the future.

Swift is the first artist at her level to attempt to do something like this, and the success or failure of her action will leave a lasting impression on the music industry for years to come.

If you are looking to reminisce about your childhood by listening to “Fearless,” or you simply want to check out the most awarded country album of all time, I definitely recommend giving it a listen.