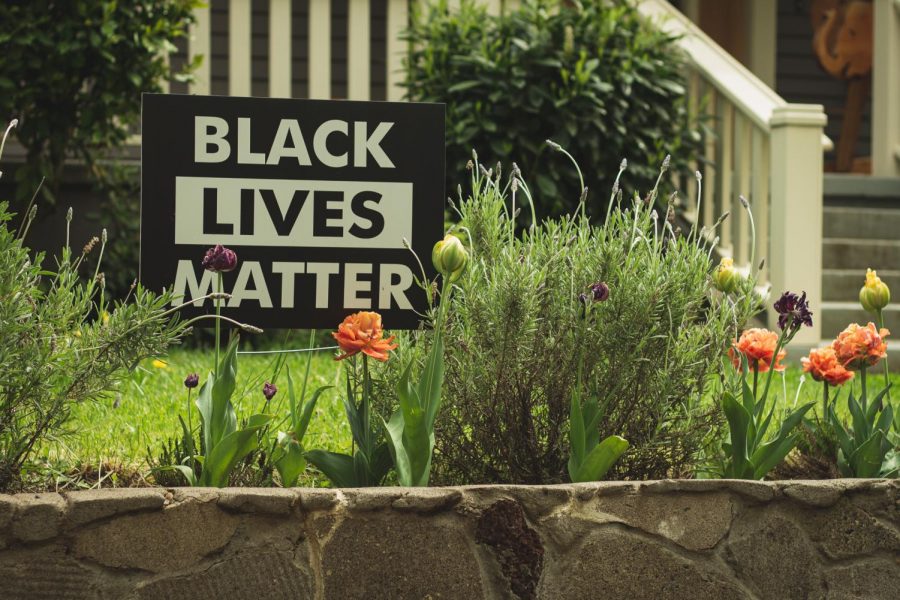 Support for the Black Lives Matter movement has been displayed in the form of signs.

After last year’s explosive outroar among millions of people, from young children to senior citizens, in support of the Black Lives Matter movement following the killing of George Floyd, there has been continuous support for the movement plastered on the streets and shared on social networks.

Combined with the recent trial and conviction of police officer Derek Chauvin, who is responsible for the murder of George Floyd, and the indictment of three men on hate crime and kidnapping charges after the fatal shooting of Ahmaud Arbery, there seems to be a sense of hope that progress will be made. However, the fight against injustice doesn’t end here.

America was born from the enslavement of Africans, and the repercussions continue today through systemic, institutional racism, which needs to be exposed and eradicated.

Who can be racist?

“Reverse racism” is a term that some white people may use to describe a false notion of the presence of racism against white people.

However, systemic and institutional racism is not the same thing as racial prejudice or bias. Prejudice can be directed toward any person of any skin color, while racism encompasses the overall privilege and power that one group has over another.

To believe in the concept of “reverse racism” is to completely disregards the systems of racism that have run rampant throughout our country since it’s beginning. Racism is derived from the belief that a specific race is the dominant one, and this dominance has been controlled by one race for all of history: white people.

Being white doesn’t mean that one will exhibit blatant, intentional acts of racism towards others, but believing in “reverse racism” takes away from the experiences that the people of color community has faced.

Racism can be extremely subtle or distinctively crude. Both forms of racism are hateful attitudes or behaviors directed at a minority group or individual. Racism can be practiced by groups, individuals, and even societies in forms of speech and actions.

With America’s racist history towards Black Americans, and numerous other minority groups, it is not surprising that racism still runs rampant throughout the country, and across the world.

Racism is rooted in white power, history, and institutions. When America was first colonized, ships were brought over carrying shackled, malnourished, and dying Africans. This was only the beginning of what Black people would face.

Decades of Black Americans have faced both overt and covert racism and discrimination. The Black community has been segregated in schools, restaurants, on public transportation, and in workspaces. Racism can appear in any and all forms that target, disadvantage, or suppress the Black community and other minority communities.

How does racism intersect with law enforcement?

There is a significant disparity between white and Black Americans within the legal system. One in every 1,000 Black men will be killed by the police throughout their lifetime. White people account for 62% of the population and made up 54% of deaths due to encounters with the police. However, black people make up around 12% of the population, and account for 25% of the deaths due to use of force by police.

With police officer Derek Chauvin’s conviction many Americans and President Joe Biden see an opening to confront the systemic racism that leads to the death of members from the Black community.

Why do I need to call out others for being racist?

Even if you believe you are free from racial bias, if you are present when someone says something racist and you don’t do anything about it, you are a bystander to racism. As a bystander, you are skipping out on an opportunity to actively support those being targeted and contribute to anti-racist efforts.

We must not repeat traumatic history for minority groups in America when we could stand with them to educate others on the effects of racist actions and comments, and why it is wrong.

If you are white, you have a specific role to play in calling out racism. You have power and privilege, even if you aren’t aware of it. You most likely won’t be targeted on the street, or by a police officer due to the color of your skin. White people have the authority to raise important issues and spur essential dialogue when people of color have been dismissed.

It may be uncomfortable to tell off the person who said something that they shouldn’t have. As a white person, it’s uncomfortable to call out racism when you see it in other white people; but this discomfort does not compare to the pain, oppression, and discrimination that has been inflicted on people of color for centuries.

How can I call out racism?

Listen to others’ experiences with racism. If you are with a friend, and they are subjected to a racist comment, make sure they are OK. Call out the person who made the comment, and explain how their words affected your friend. Let your friend know you are there for them, and ask them what you can do to help.

Explore conversations that can be awkward. Having the desire to help but never doing anything is just as harmful as putting someone down. Do not be afraid to have conversations about what you may have said, or what a friend might have said, and how it could cause harm to another person.

Position yourself as a learner, and not an expert. You will never truly understand what another person has experienced in their life. No one is an expert on issues that they are not affected by. People are much more likely to listen to you if you also say you are learning. No one wants to feel condescended to.

Carry love, compassion, and patience into all conversations. You are not trying to attack someone because of what they said; instead look for a loving approach to help the person understand the effect of their actions and be mindful about making change. Be willing to identify, call out, and deconstruct your own racial biases and the impact they have on your behavior towards others.

Racism can be an uncomfortable topic, and it should be. Our world drowns in inequality, discrimination, and hatred, but confronting and addressing the hate is something anyone can do. The next time you find yourself present when a racist comment is said, or an offensive action is taken, reflect and take initiative on how you could make a change.