As the Fall Sports Season Begins, Teams Convene On Campus to Train 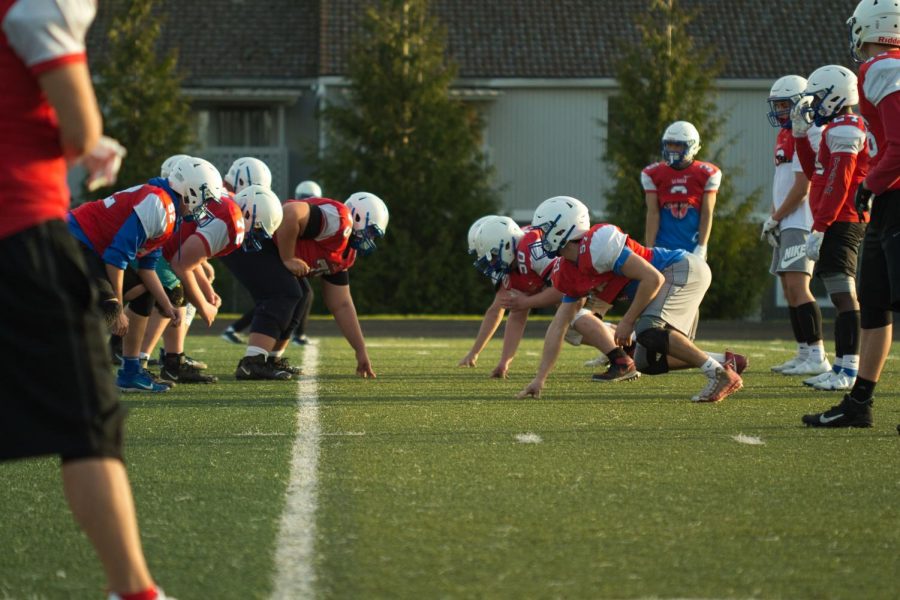 In preparation for competitions, student athletes are seen practicing around the campus.

After almost a year of sports practices and games being cancelled due to COVID-19, fall sports teams are getting underway with their first games, while other teams begin practicing together prior to their season.

In order for teams to practice in person, there are COVID-19 precautions implemented to keep everyone safe.

“We all wear masks the whole time, and we space out in the dugout and cages so we aren’t crowded together,” senior David Jensen said, a member of the varsity baseball team. “Because baseball is outdoors and non-contact, the way we actually play isn’t [affected] too much at all.”

Sophomore Catie Tassinari said that the volleyball team sanitizes their volleyballs between uses, along with being “really cautious about distance, especially when we’re doing a meeting or something, when we’re just talking, not necessarily playing on the court.”

Junior Brody Crowley, who plays on the varsity football team, said that he is “hyped” about the season, and “as much as I hate having a mask and a mouthpiece in while playing, I just hope my team and the opposing teams can keep [it] up so the season doesn’t get canceled,” he said. “That and winning are my only concerns.”

With the transition into in-person practices, players have been excited to be back together.

“It’s good to get back out there and play with friends and it’s fun to play with teammates and get to know everyone better, and it’s always good to be able to experience how a team plays, or the atmosphere of a team,” sophomore Finbar O’Brien said, a member of the boy’s varsity soccer team.

Freshman Seychelle Marks-Bienen said that the girl’s varsity soccer team has been practicing “for a while now,” and that “it’s been really good to get to know everyone and I feel like the team has bonded a lot the past few months.”

Tassinari said that she was “a little nervous” for the season to start. “I haven’t been playing sports  almost every day of the week like I am now in… a really long time… but it’s been a lot of fun,” she said. “The coaches have been really good about just getting back into the schedule of how [the] volleyball schedule [was] last year, so just getting us into practice, but being conscious of the fact that all the players haven’t really been having really rigorous practices for a long time.”

Teams have still been able to bond with each other, despite COVID-19 precautions.

For example, Marks-Bienen and O’Brien said that the varsity soccer teams are able to build camaraderie through practices, despite being unable to participate in typical team bonding activities because of the pandemic.

Similarly, Crowley said that though it’s been “tougher than in past years” for the football team to bond, players are still finding ways to connect with each other.

“Without team meals, team prayer services, and not being able to huddle in big groups before practice it makes it tougher, but not impossible,” Crowley said. “This year the bonding is happening in the work we put in. With low numbers of players at every position there isn’t much rest time, so practice isn’t easy and we push through it as a team.”

Jensen also said that the baseball team has been getting to know each other better through training together. “Practicing and working out together, even [with] the different protocols and precautions, provides a great place to connect with people in a way that online school hasn’t,” he said. “That has been great, and it’s just a ton of fun getting back together with the team and working towards our season.”

With the absence of sports at La Salle, student athletes have been missing the social aspect of being on a team. “Honestly, the thing I missed the most was just being able to play with my teammates and see them, because it’s really hard to motivate yourself when it’s just you, so that was the main thing that I missed,” Marks-Bienen said.

The athletes shed some light on how they feel like their teams will do this season.

“We have a strong team,” O’Brien said about the boys varsity soccer team. “We are getting back into the flow of things and I feel like we’re going to do pretty well, considering the situation that we have to endure. But I think that we are connecting better every day and I think that we will do great.”

Marks-Bienen said that she “hopes” the girls varsity soccer team’s season will do well. “There been a lot of unanswered questions because people have been moving around and some injuries, so everyone is kind of sorting things out as they go and trying to work with what they have, but I think it will be good no matter what and that we already have a really good group of people,” she said.

Jensen feels that the players on the varsity boy’s baseball have put in a lot of effort. “We have a really large and talented senior class that has really put in the work over the last couple years,” he said. “Then behind us, we also have a lot of depth with the juniors and sophomores that will play a big part in our success. It’s a good group of guys who are looking to make an impact when [the] season rolls around.”

Tassinari said that she feels like the girls JV volleyball team will “do really well, just based on the past practices” during their season. “I think that we’ve been doing, surprisingly well, based on the fact that some of us don’t know each other,” she said. “I have freshmen on my team, and even though we haven’t had much time to get to know each other, we’ve been working well together. And I think the fact that we’ve all been in the same situation together for the past couple of months has really brought us together more.”