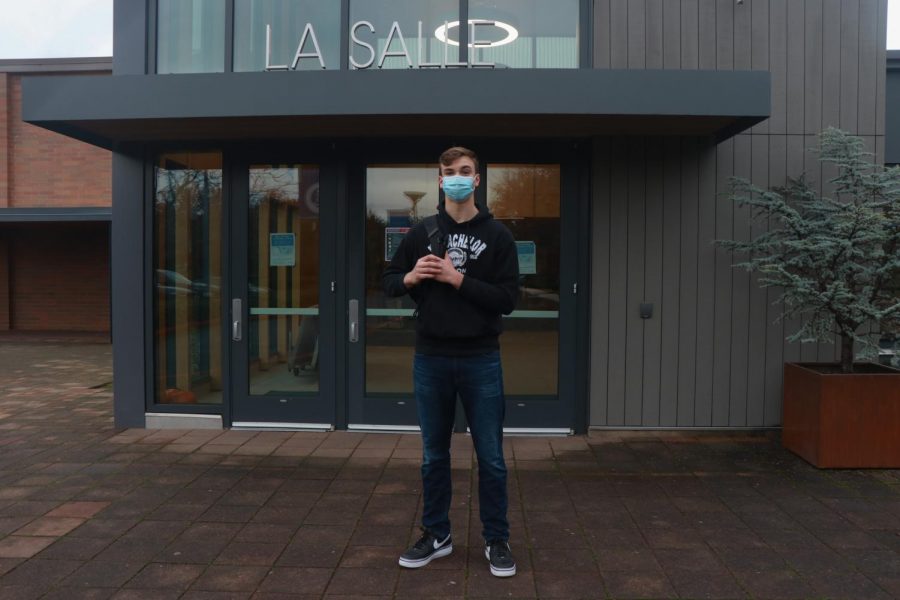 Ellison has two siblings: Maddie Hansen ‘19 and Braeden Hansen ‘21. However, his mom, who works as a firefighter, is his biggest influence and inspiration.

6-foot-3 freshman and athlete Grant Ellison said that he has some big aspirations for his time in high school, so he doesn’t have a lot of free time, with his schedule mostly filled with sports and school.

The hardest part of online school for Ellison is trying to motivate himself and avoid procrastinating.

Ellison has been playing basketball since the third grade at his previous school, St. Agatha Catholic School, and plans to continue playing throughout high school. Ellison has also been participating in La Salle’s preseason workouts.

For Ellison, the difference between football and basketball “is [with] football, I get so much anxiety in between plays because there’s kind of rest time in between one play from another unless you’re like, right down to the game,” he said.

For his first season of basketball, Ellison is hoping to make the Junior Varsity team and learn how to dunk.

“With basketball, once the ball is tipped off, it’s like I don’t even feel anything,” he said. “You just keep going. It’s kind of relaxing, in a way.”

Something that not many people know about Ellison is that he likes to cook.

“I’ve kind of cooked with my mom my whole life,” said Ellison. “Me and my mom are best friends.”

Ellison has two siblings: Maddie Hansen ‘19 and Braeden Hansen ‘21. But, his mom, who works as a firefighter, is his biggest influence and inspiration.

“We do everything together,” said Ellison. “We share the same sense of humor, we laugh at the same things, [and] she’s honestly kind of a part of my friend group. Like she’s my friend group’s favorite mom.”

Moving forward, Ellison is not sure where high school will take him but he’s “along for the ride,” he said. “We’ll see how it goes.”