Athlete of the Week: Abby Sheets 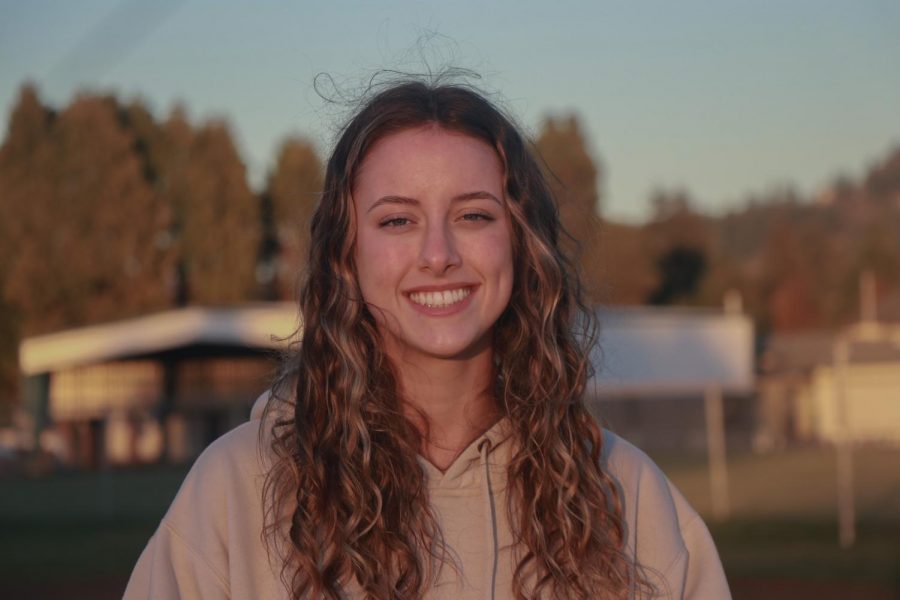 Joining the track and field team has allowed senior Abby Sheets to compete with her friends and have an “overall good time,” she said.

Senior Abby Sheets has been playing volleyball since her early elementary school years, helping her to build longstanding friendships along with teaching her valuable life skills that she will take into adulthood. In addition, she also participates in track and field, which she considers her primary sport.

Volleyball has always been something that she enjoys, as Sheets said that “the pace of the game can be really exciting” and “when you’re in the middle of a game or in a practice you’re all working hard.”

Sheets described the elementary and middle school that she went to as “really small,” and she remembers some of her earliest memories of playing volleyball during her time at this school. “Sometimes we had to mix grades to make a full team, which was interesting,” she said.

Although she did take a short break from volleyball for a few years in elementary school, she soon picked it back up in sixth grade and then continued to play in high school.

Additionally, Sheets started competing in formal track meets in the third grade — something she had experience in beforehand and still does now. “My family has always been pretty involved in track so I’d been participating in all-comer meets for almost as long as I can remember.”

Sheets first decided to join the La Salle volleyball team because she wanted an opportunity to build friendships and establish a friend group at La Salle since she did not know many people entering the school. “Some of my best friends I’ve met playing volleyball,” she said.

Sheets has spent the last three years in the La Salle volleyball program as middle and right side hitter, and she made the varsity team her junior year.

While Sheets was on the volleyball team as an underclassmen she always looked up to the upperclassmen. “It was really good for me to form friendships with them because it made me feel more a part of the team,” she said.

Sheets said that one of her favorite memories occurred last school year, during her first year on the varsity team, when the team was heading to the playoffs. “Everybody was like, ‘oh my gosh, we’re going to state, this is going to be so cool,’” she said. “And no matter how we did at state, it was just cool to even get to go.”

Volleyball has taught Sheets “to develop leadership skills,” she said, “and just learning how to work together with people.”

Sheets joined the track and field team when she first came to La Salle as well, and it is something that she has “grown to love,” she said. As she is part of the varsity team, she feels like “it’s a great outlet of stress relief for me where I’m constantly able to get better at something I love.”

Joining the track and field team has allowed Sheets to compete with her friends and have an “overall good time,” she said.

The main events Sheets participates in are heptathlon and high jump, but she said that some of her “other favorites are shot put and hurdles.” Over the years, she has felt pride in her personal records which include a 5’6” in the high jump and 34′, 5.5” in the shot put.

Reminiscing on her first year of track at La Salle, Sheets said that one of her favorite memories was when she went to state at Hayward Field in Eugene. She also loves “when it’s time for the 4×400 and everyone stands on the back corner around the track and just goes crazy cheering on the runners,” she said.

Over time, track and field has taught Sheets that she is her “own biggest competitor because it’s a really mental sport and how the people around you can do shouldn’t impact how well you do,” she said.

As a result of the coronavirus pandemic, both the volleyball and track and field teams haven’t had the ability to do in-person practice as often.

“I was really looking forward to playing this year,” Sheets said. “I’m trying not to stress too much about it because I know there’s nothing I could do about how fast the pandemic goes or moves on.”

Although Sheets will not be continuing with volleyball in college, she does plan on pursuing track and field. “I am going to actually run track in college,” she said, “which will be a big challenge but it’ll be fun.”

Sheets does not know what specific college she wants to go to yet, but for her a Division I college is the goal. If she gets there, Sheets dreams of qualifying for the NCAA Championship.