Taylor Swift’s New Album, “folklore,” Is a Welcomed Switch Up, Showcasing Her Talents and Maturity 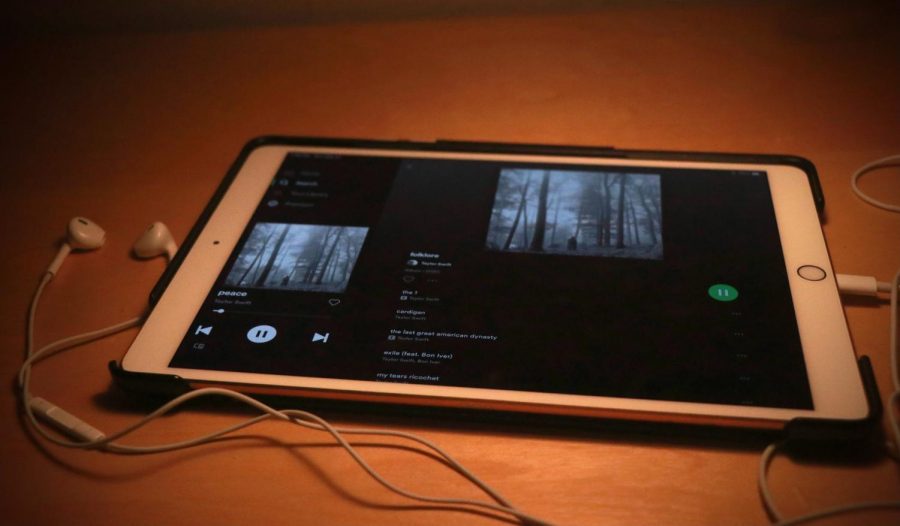 Taylor Swift's new album, "folklore," is very mature in the matter of sound and shows that she still has what made her famous.

On July 24, as I was sitting eating breakfast and scrolling through Instagram, I saw a new post from my favorite artist, Taylor Swift. To my excitement, I discovered Swift was dropping her new album, “folklore,” at 9 p.m. The album would include 16 new tracks with one deluxe album track.

As a shock to many, Swift’s new album includes a few explicit songs.

This comes as a surprise since Swift only swore in her music for the first in 2017 with her song “I Did Something Bad” on her album “reputation.” She then did this again with her hit song “The Man” released in 2019 on her album “Lover.”

Swift tries something new with the album “folklore.” Instead of continuing on the track of pop or returning to her country roots, she went in a completely different direction.

The album is alternative with some folk-inspired instrumentals.

Swift mentions on her Instagram post that unlike all her previous albums, most of the songs are just stories and perspectives that she has made up. This is a big change since all of Swift’s previous albums have been about her experiences and, as she noted, are like her diaries.

In my opinion, “folklore” is one of her best and strongest albums.

Swift’s claim to fame will always be her powerful lyrics and storytelling ability. Her album “folklore” captures both of these strengths.

The album has a more acoustic approach to its songs, which is refreshing and makes it the perfect album to listen to when you need to relax. Although it lacks super loud or high production choruses, the songs are catchy and I still find them getting stuck in my head.

The album opens up with the soothing melody of a piano.

The first song on the album, “the 1,” is all about looking at a past relationship and thinking if it would have played out differently. Swift sings, “and if my wishes came true, it would’ve been you. In my defense, I have none for never leaving well enough alone, but it would’ve been fun if you would’ve been the one.”

Some of my favorite songs on the album are “illicit affairs,” “my tears ricochet,” “exile,” and “the last great american dynasty.”

The song “illicit affairs” is in the perspective of a young woman who is in a secret relationship that is quickly falling apart. In my opinion, the bridge is what makes or breaks a song. If the bridge is powerful, it is sure to be one of my favorites.

For that reason, “illicit affairs” is one of my favorite songs because it has one of the most powerful bridges on the album. Swift sings, “you wanna scream, don’t call me kid, don’t call me baby, look at this godforsaken mess that you made me, you showed me colors you know I can’t see with anyone else… And you know damn well for you I would ruin myself a million little times.”

As Swift sings, you can hear the emotion of the lyrics in her voice. This brings the bridge home.

The song “my tears ricochet” is one of the few songs on the album that applies to Swift’s life.

Most artists don’t own the complete rights to the music they make, including Swift. When her contract was up in 2018 with her record label, Swift wanted the rights to her music back, offering to pay them for her catalog.

Swift felt betrayed by a label that she had helped build since she was only 16 years old. That is why she wrote the song “my tears ricochet.” Although it is unlikely that Swift will get her rights back to her music, she is legally allowed to rerecord all of her old albums in November, which she announced she will be doing.

In the song “my tears ricochet,” alongside a haunting melody, Swift sings, “I can go anywhere I want… just not home and you can aim for my heart, go for blood but you would still miss me in your bones and I still talk to you when I’m screaming at the sky and when you can’t sleep at night you hear my stolen lullabies.”

In this case, “home” is her old record label, where her previous albums are. When she sings “when you can’t sleep at night you hear my stolen lullabies,” her stolen lullabies are her first six albums that she does not own the rights to. This song is full of metaphors and imagery in a way that paints a picture of the situation she is in.

The song “exile” contains a feature with the band, Bon Iver. The song opens up with William Bowery’s deep voice singing “I can see you standin’, honey with his arms around your body, laughin’ but the joke’s not funny at all.” The song “exile” is about two exes that see each other and in their heads, remember their relationship and what went wrong.

Swift’s and Bowery’s voices go perfectly together as they both sing their perspectives. Bowery and Swift sing together, “all this time we always walked a very thin line.”

This song perfectly captures the miscommunications that can occur and lead to the downfall of a relationship. Even as they sing back and forth, it is clear that they still are not listening to each other.

The song “the last great american dynasty” is about Rebakah Harkness, who owned Swift’s Rhode Island house before her. The song addresses Harkness’ life while living at the house and the prejudice the townspeople had against her.

My favorite part of this song is the chorus when Swift sings, “and they said, there goes the last great American dynasty, who knows, if she never showed up, what could’ve been, there goes the most shameless woman this town has ever seen. She had a marvelous time ruining everything.”

This album is fantastic. It is a welcomed switch up from her pop music, and is arguably one of her best albums. I love the acoustics, powerful storytelling, and lyrics. This is a very mature album in the matter of sound and shows that Swift still has what made her famous.