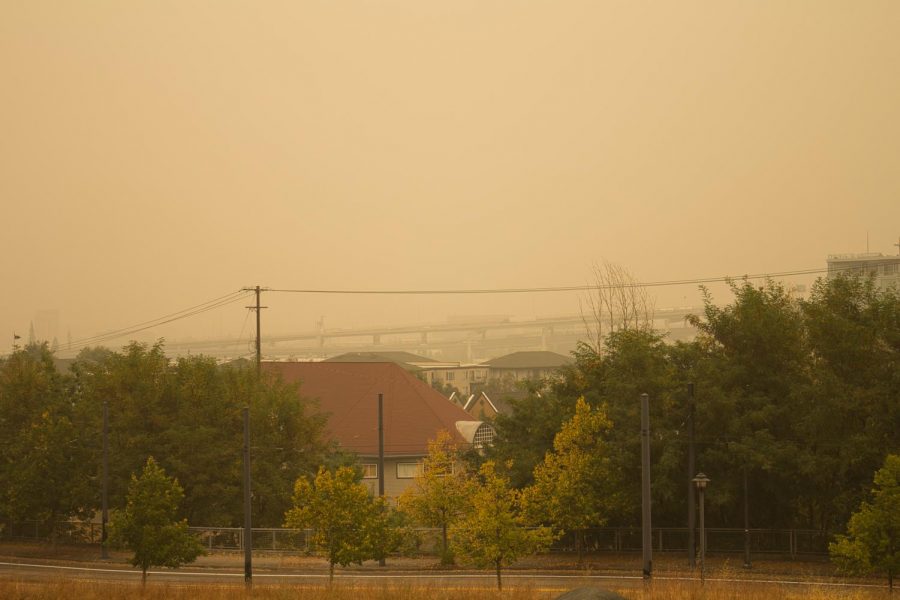 In past years, Mr. Donnelly has volunteered his time through the National Guard to help with firefighting, though this year he was unable to.

For band and yearbook teacher Mr. John Donnelly, the Oregon wildfires weren’t the biggest threat that caused him to evacuate with his family in early September.

Mr. Donnelly evacuated with his family after a large fire, separate from the wildfires, ignited inside a warehouse near his house, adding to the already smoky air.

He has two kids, who are ages two and eight. “I didn’t want to expose my kiddos to nasty smoke,” he said. Though their home was in a level two evacuation zone, they decided to leave when the warehouse, which was housing wood pallets, caught fire.

When Mr. Donnelly received the message that they were in a level two zone, he initially felt comfortable staying put. Later, when the warehouse fire was sparked, he said, “‘that’s too close to home.’”

Mr. Donnelly had already prepared and made plans while they were in a level one evacuation zone, so the decision to evacuate “was pretty easy,” he said. “[At] 5:30, 6 o’clock, my wife just got home, and we said ‘let’s pack up and just grab what we need, and we’ll head over.’”

He and his family stayed at his parents’ house in southeast Portland. They were there for four nights, arriving Thursday and leaving Monday.

He said that although they were treating it as a “little mini family vacation,” it was odd to go back home to live with his parents, comparing it to coming home to your parents after being at college. “Now imagine that same thing, but you’re married, and you have two kids,” he joked.

Before leaving on Thursday, Mr. Donnelly said that it seemed like a normal day in terms of routine. However, with all of the smoke, he was only able to see around 100 to 200 feet in front of him while driving.

“It was pretty smoggy [and] very difficult to see in front of you,” he said. “I think that wasn’t as bad as just the thickness… and it reminds me of exactly when I volunteered for firefighting a couple of years ago and last year.”

Mr. Donnelly is a part of the National Guard, and for the past few years, he has been volunteering his time to help with firefight relief. However, he was unable to volunteer this year because of a partial knee replacement surgery.

Last year, he spent two weeks volunteering as a road guard in a Umatilla fire. Two years ago, he helped with two fires in southern Oregon, and three years ago, he traveled to California, where he helped out as needed for another two weeks.

“One of my most rewarding parts of my service is the fact that I can go and help out during firefighting season,” Mr. Donnelly said.

He said that if a soldier accepts a request for volunteers, they have a couple of days to gather what they need before heading to the location.

“When we’re there for firefighting, depending on where you are, you go in the middle of the field, and it’s like camping… there’s nothing there and you sleep on a cot. You live in your uniform all day long,” he said.

When working on a fireline, soldiers wear firefighting gear, and oftentimes don’t have access to showers or bathrooms. “It’s like roughing it in camping,” Mr. Donnelly said. “Sometimes there’s clothing services where they can clean your clothes, and your service can go for as long as you want it to. It’s all volunteer [work].”

In the past, his unit has helped with the water crisis in Salem, and this year, around five soldiers helped out with firefighting in some way. There are about 30 soldiers in his unit, and five have firefighting cards, including Mr. Donnelly, who got his card three years ago.

Mr. Donnelly said that packing to evacuate was easy because he was able to concisely decide what household items were most important. He has what he calls a “love box,” which includes “army career stuff and family career stuff, birth certificates, [and] marriage certificates.” Another one of his document boxes is waterproof and fireproof, with a lock for extra protection.

For Mr. Donnelly, taking his musical instruments with him was a big priority. “I have probably $40,000 in instruments that I had to lug out [to] the car and take with me, because I didn’t want those to get burnt up,” he said.

Despite preparing for the worst, “we were pretty confident that nothing was actually going to happen since we were in stage two,” Mr. Donnelly said. “Most of the stuff we grabbed was just stuff that we called camping [gear].”

Each person in his family also has a bag with an emergency kit that they have in case of a larger emergency. The bags include MREs, or meals-ready-to-eat, as well as five bottles of water, a full medical kit with a tourniquet, and other combat materials.

During the process of getting ready to leave, Mr. Donnelly said that his two year old “was just having fun,” whereas his eight year old had a better grasp on the situation. “He definitely understood what was happening, especially since we could visually see the fire from our house — the black smoke going everywhere,” he said. “When you’re eight you joke about everything… so I think he was a little more lighthearted, but at the same time, he will remember it.”

Mr. Donnelly said he only had to cancel one day of classes over Zoom, and instead assigned asynchronous work for his students. After the weekend, he was able to hold classes normally.

After returning home on Monday night, “the smoke was still kind of an issue,” he said, “but we had been reduced down to the level one, and that warehouse fire was long gone.” Mr. Donnelly and his family were also in contact with their neighbors who had not evacuated, and were able to get updates during the time that they were away from home.

On Saturday, after evacuating, Mr. Donnelly went back to his neighborhood to check in on his neighbors, who don’t have a vehicle, and weren’t able to go anywhere. He said that he brought them some food and water and made sure they were staying safe inside.

When he went back to his neighborhood, the air quality had worsened since Thursday, when he had left. “It was awful,” he said.

Much of Mr. Donnelly’s concern about the fires and smoke alleviated after safely returning home. “[It was a] huge relief that things were subsiding,” he said.