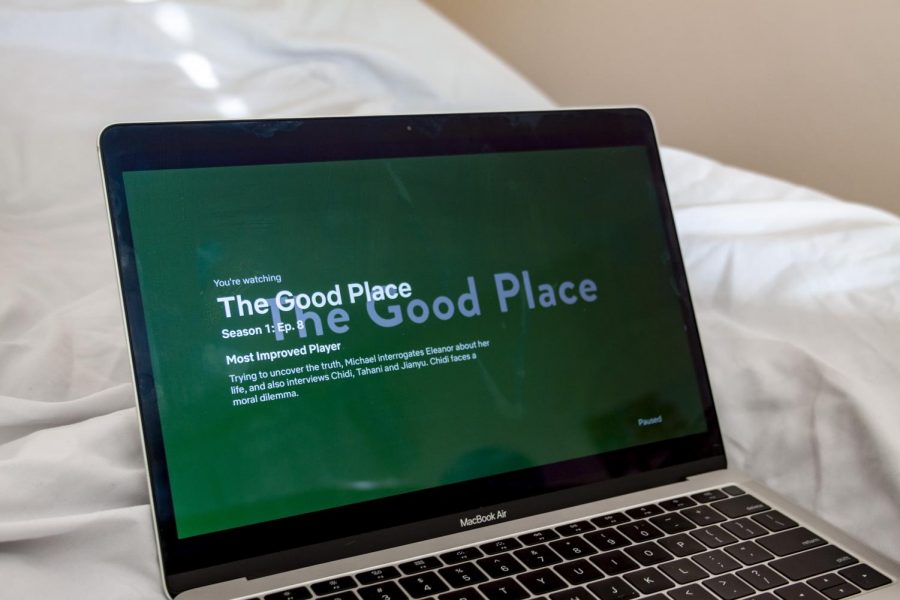 The Good Place always succeeds in dangling the next anticipated moment in front of you, and then yanking it back in a strange turn of events.

Welcome! Everything is fine.

You’ve entered The Good Place, the magical afterlife waiting for you after death. Despite the abundance of frozen yogurt, the quaint town buildings, and the all-knowing servant humanoid Janet, something else much more sinister is at play.

The writers of “The Good Place” have skillfully woven together moral themes, in-depth character development, and tangible emotional bonds in a way that is seamless and highly engaging. And because it can be found on NBC, Netflix, Hulu, YouTube TV, and Sling TV, you won’t have to miss a single episode.

From the very start, the viewer knows that something has gone very wrong. Eleanor Shellstrop, the main character, with her crew of four compatriots, has been supposedly put in The Good Place — a place made to be like heaven — by mistake. She was swapped out with her name-fellow, another Eleanor Shellstrop, who represents the pinnacle of humanitarianism. The Eleanor who was placed in The Good Place incorrectly, however, led a chronically flawed life.

Flowing through episode after episode, I found Shellstrop’s early struggle to keep her misplacement in The Good Place hidden from Michael, the ‘architect’ and demi-god ruler of this ‘neighborhood,’ exciting, intricate, and most importantly, I felt truly invested in her asylum. On the edge of my couch, the various close calls and moments of sheer terror kept me in touch with the story nearly the entire way through.

Outside of the action, her moral struggles for a long term solution to the problem and becoming ‘good’ led the viewers to a deeper understanding of her character, who she is, who she wants to be, and what the authors of the show want us to know about society today. For me, this high quality of a show is difficult to find in television today, and maybe where honest introspection is most needed. In my analysis, “The Good Place” seems to have two critiques of the modern world.

One is the overly simplistic way the western world views moral issues, separating out the complexities of humanity into two main groups, the good and the bad. For Eleanor, this concept manifests as her frustration with the unchangeable system that would have, apart from the flaw that let her into The Good Place, tortured her for eternity, leaving no room for the morally grey, or the fact that morality is inherently subjective. One point is how the ‘system’ that evaluates the good and bad deeds of a person could theoretically decide their fate for the rest of eternity. Even more, how could a finite crime justify the need for infinite punishment?

Another way of conveying this message comes through a deeper understanding of the characters involved, as all four of those belonging to the ‘group,’ apart from Eleanor, have flaws most would perceive to be subtle or wishy-washy.

For most of us, despite the easy moral dilemmas that modern entertainment will serve to you on a silver platter, we have the type of flaws that could only be fully revealed in a deeper understanding of a person. “The Good Place” succeeds in this endeavor by diving into the unique stories of the four main residents in their own lives back on earth, something that would conflict with both the modern and archaic narrative of an easy good and evil in every scenario.

The second critique of modern culture derives from Eleanor’s interaction with the one she wrongly replaced, who the other characters refer to as ‘real Eleanor.’ In an attempt to explain away the differences in lifestyles, ‘fake Eleanor’ talks about the rough divorce she experienced as a child, to which the ‘real’ one responds with a comically tragic story about her upbringing.

While originally proposed as a joke, that idea later comes back when Eleanor admits that all her life she has shirked the responsibility of her own actions and shifted them off to her parents, something that is arguably common today. This is accompanied by a flashback to her life as a teen, where her parents grossly neglect her and force her to live out a completely independent life, apart from any mentoring connection to a responsible adult.

I would give “The Good Place” an 8.7/10. It succeeds in always dangling the next anticipated moment in front of you and then yanking it back in a strange turn of events. For me, this always kept me wanting to watch more and wanting to see more of the characters I had grown an attachment to early on.