The La Salle Falconer • May 20, 2020 • https://lasallefalconer.com/2020/05/next-level-senior-jackie-blakely-commits-to-seattle-pacific-university-to-continue-her-soccer-career/ 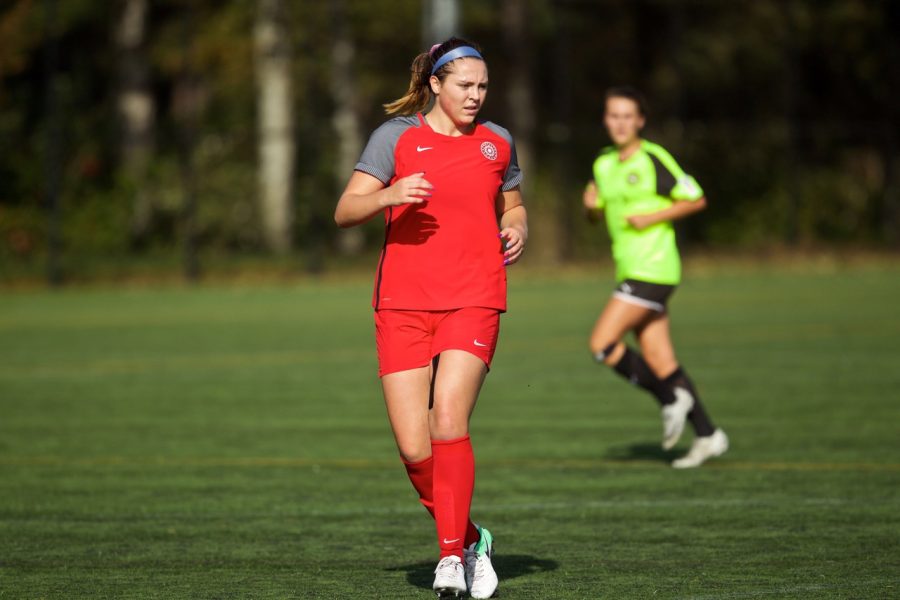 Senior Jackie Blakely has been playing soccer since she was eight years old. When she first began playing, she started in the position center back, and then gradually moved into the position she plays nowadays, which is center forward.

Blakely is a part of a select few seniors who have signed to play sports at the collegiate level, students we are showcasing in our Next Level Seniors series.

Next fall, Blakely will attend Seattle Pacific University, which is a Division II school. “I like the team and the coaches, and the community that the team has,” she said. “I like that it was a really small school, so… it’s easier to adapt to.”

Blakely not only played soccer growing up, but basketball and swimming as well. Her brothers played soccer which piqued her interest in trying the sport.

Since her freshman year, Blakely has played with the Portland Thorns Academy. During the season, she practices with her team three to four times a week with one or two games on the weekend.

Since the COVID-19 pandemic, Blakely hasn’t had the opportunity to practice with her team, but she is exercising and staying fit independently. “[I run] one to two miles every other day,” she said. “I do ab circuits, leg circuits, and arm circuits to keep muscle and then try to get ball work in.”

Along with her own workouts, Blakely adds in drills provided by her team. “My team sends out workouts, but I kind of mix in my own with theirs,” she said. “It makes it more interesting for me.”

In deciding where to go to college, Blakely also looked at other schools such as San Diego State, University of Alabama, and Penn State, but she couldn’t see herself living on those campuses because they were so large. Blakely felt that there wouldn’t “be a sense of community,” she said. “I thought about going to Regis, which is where my brother goes, but I [felt] I needed to be in a different space to grow.”

Before Blakely officially signed her letter of intent, she had already verbally committed to Seattle Pacific University during June of 2019. Blakely began talking to the school during her freshman year, and attended their ID camp, which is a college prep program that introduces and exposes players to college coaches. “I just stayed in contact with the coaches the rest of my high school career,” she said. “It is just a lot of putting yourself out there, and a lot of emailing and calling, just keeping in contact until they are allowed to contact you.”

While quarantine has stopped her from practicing with her team, Blakely is still determined to be ready for next fall. “My goal is to be as fit as possible, and just kind of try to keep myself motivated and working out, so I can be at a high level when I get there [and] so it can be an easier transition,” she said.

Along with Blakley’s goals building up to the beginning of her first college season, she also has other goals for once she begins playing at Seattle Pacific. “My goal is to be a starter and to score a lot,” she said.

Blakely plans to major in psychology next year. She became interested in this field during her junior year at La Salle when she took psychology as an elective. “It’s very interesting how people think about things and decide to do things,” she said. “Criminal psychology is very interesting to me. I’m [also] interested in how when you’re younger your traumas and stuff that happened to you affect who you become when you’re older.”

Despite Blakely’s commitment to Seattle Pacific University, she wasn’t as confident in the beginning of her recruitment process. “Before I really started talking to schools, I wasn’t confident [that] I was going to get recruited,” she said. “I guess I kind of gained confidence that I [had] the ability to [get recruited].”

As Blakely learned to believe more in her soccer abilities, she said that it became easier to talk about herself to coaches.

Blakely said that through all her time and experience with soccer, she has not only improved her skills but also learned life lessons. “I’ve learned to be more open to different people,” she said. “It has taught me to be a leader and more willing to talk.”

Blakely has many accomplishments such as winning Player of the Game and Player of the Year at the high school state final her freshman year. Despite this, she knows she might face challenges in college with balancing school and soccer. “I think the hardest part will probably be keeping up with school when we start traveling,” she said.

Blakely accredits her family for being her biggest supporters but said that she has gained wisdom and advice from her older friends. She also said that her club coach for Portland Thorns Academy, Laura Schott, has given her a lot of advice about reaching out to colleges and communicating with them.

Since many athletes dream of playing a sport in college, Blakely offered advice to those who want to pursue this goal. “I would say make sure you’re continuously [reaching] out, even if you think you’re annoying the coach,” she said. “It is better that they know your name and know that you’re interested than to not.”