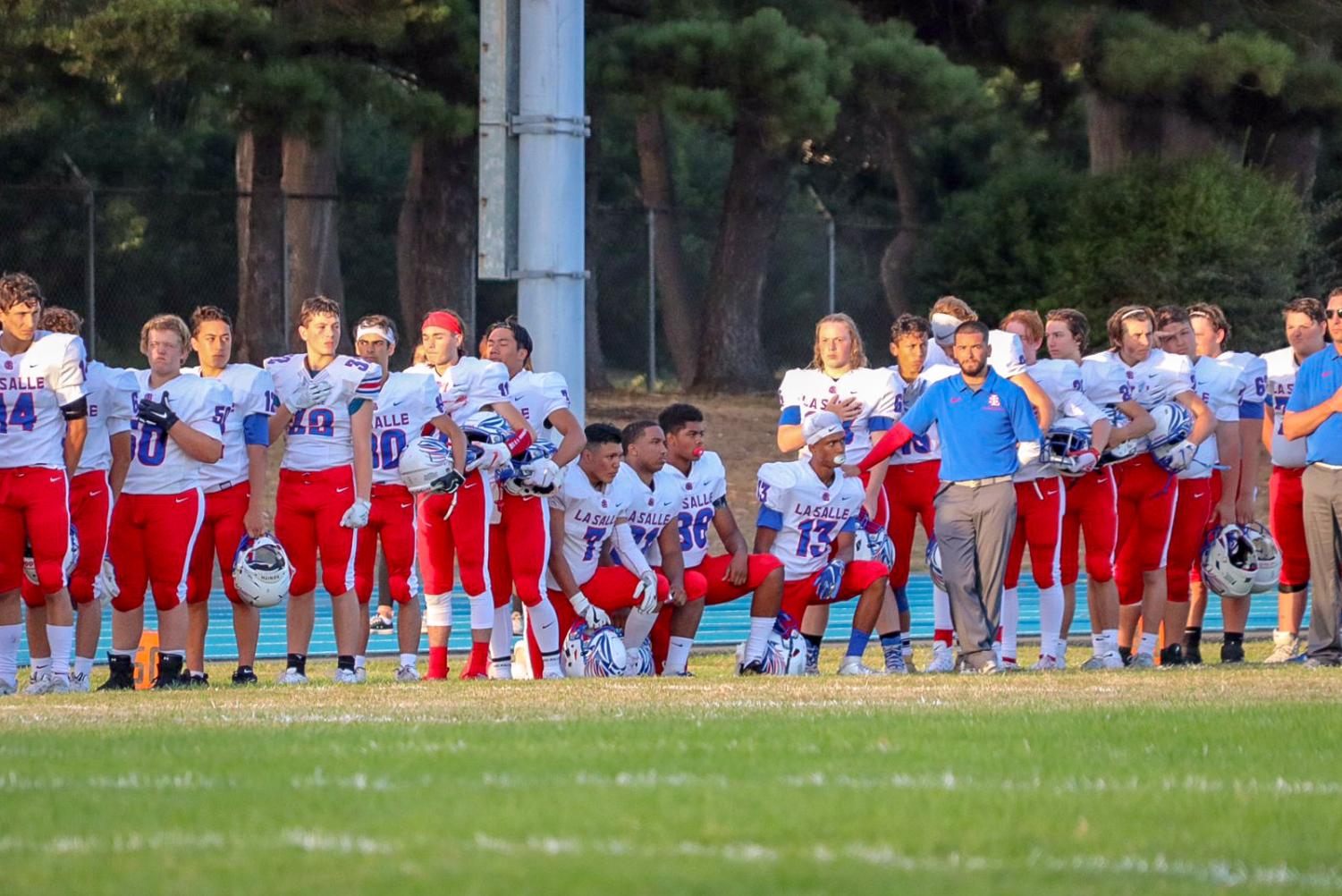 Before the start of the game against Del Norte on Sept. 6, seniors Brandon Lopez and JaJuan Lane, freshman Keenan Terbet, and sophomore Jacob Waterman are pictured kneeling during the national anthem. (Amelia St. Martin)

Before the start of the game against Del Norte on Sept. 6, seniors Brandon Lopez and JaJuan Lane, freshman Keenan Terbet, and sophomore Jacob Waterman are pictured kneeling during the national anthem.

At last Friday’s football game in Crescent City, California against Del Norte, Jacob Waterman, a sophomore, knelt during the national anthem to bring attention to racial inequality in the United States, and he plans to continue to kneel at every football game this season.

As the first student at La Salle to take part in this national protest, Waterman stated, “I think kneeling in front of an audience will bring attention to [the problem].”

Since Colin Kaepernick, a former NFL quarterback for the San Fransisco 49ers, knelt for the national anthem during a preseason NFL game in 2016, he has inspired many others, including Waterman, to do the same with the hope of bringing attention to the treatment of racial minorities in America.

Kaepernick faced extensive criticism for his repeated kneeling that season. Critics, including President Donald Trump, say kneeling during the anthem shows disrespect to the military, country, and flag. In a tweet, he stated, “The NFL players are at it again – taking a knee when they should be standing proudly for the National Anthem.”

However, Waterman specifically stated that he is not kneeling to oppose veterans and the military.

“I just want to bring attention to the subject and create a community that’s more inclusive and more respectful towards people and their differences,” said Waterman, who hopes that “people are going to realize that it’s not about disrespecting our military, but it’s more towards the greater problem that’s happening in our country.”

Waterman was motivated by Kaepernick to kneel. His initial desire to publicly protest came during the 2018 football season, but the ultimate decision between Waterman and coaches was for him to sit out the national anthem from the locker room, because he was a freshman who still needed to further establish himself as a member of the team.

“Last year, I was more nervous to do it because I was alone as a freshman… This year I have friends who are willing to do it with me and it makes me feel more comfortable,” Waterman said.

Head football coach, Mr. Aaron Hazel, stated that “[the coaching staff] is going to support him just like how we would support any of our players that you don’t agree with… we’re going to reiterate that we support them.”

“We have a lot of great men on our staff that wanted to support him, but also wanted to make sure he is prepared for… the negative side of people not understanding,” he said. “We’ve talked a lot about how we’re going to handle this and make sure that our kids feel safe and supportive.”

Mr. Shawn Kelly, one of the team’s assistant coaches, has decided to place a hand on Waterman’s shoulder during the anthem to show his regard for Waterman’s decision. “[I want] to emphasize that my hand on his shoulder is about supporting Jacob as a student here at La Salle and validating his experience as a student as well as a person,” he said.

When asked to comment on the situation, Peter Weber, the executive director of the Oregon School Activities Association, explained that the OSAA does not have a formal policy on kneeling during the national anthem and leaves it up to each individual school and school district to decide a course of action.

In an interview with The Falconer, Mr. Andrew Kuffner, La Salle’s principal and president, explained that in situations like this, the school’s “expectation would be that beforehand, they would have a conversation with their coach and their team, and… they would be prepared to respond to a potential negative community response.”

Mr. Kuffner further explained that prior to Waterman making his final decision, he met every requirement asked of him by the administration. “In this case, hearing the process that Jacob went through, he did everything,” he said.

Mr. Kuffner believes that the cultural divide surrounding athletes choosing to kneel is “a statement of how little capacity we have right now, as a society, to engage in thoughtful dialogue.”

Waterman is not the only one choosing to kneel. Religious Studies teacher Thomas McLaughlin Jr., also known as Mr. Mac, along with team members Keenan Terbet, a freshman, and seniors Brandon Lopez and JaJuan Lane, are kneeling with him on the field.

“I wanted to help him… on his mission of creating a better atmosphere and create awareness for the cruel truth he wants to put out there,” Lopez said.

Due to the controversy, several other members on the team declined to comment about Waterman’s decision to kneel.

Mr. Mac’s decision to kneel with Waterman is influenced by his past involvement in the US Military.

“I am a former US Air Force Officer… and for years I haven’t sang the national anthem… but I stand and I pray,” he said. “I pray for peace and I pray for unity for people of all colors. Being together, I envision a world without boundaries.”

Mr. Mac said that he is very proud of Waterman and his “courageous” decision to kneel.

“A lot of the attention has been on police brutality, but more broadly, the injustices that African Americans still face in this country,” he said. “As a white man, I have much more responsibility and positions of privilege and power to make changes than people of color. If I don’t use that position, and if I don’t use my knowledge in my belief that the injustice is happening and do something about it, then I can’t really call myself a Christian. I can’t call myself a good human being.”

View Comments (9)
About the Writer 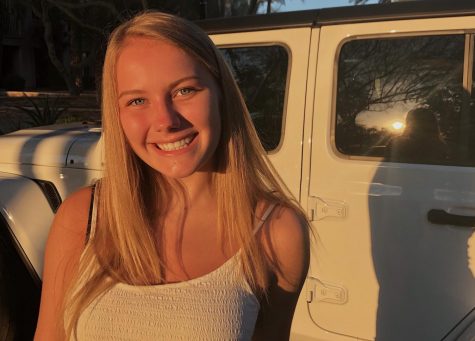 Maggie is a junior at La Salle. She is the varsity volleyball captain at La Salle and a member of student council. Outside of school, she works at Dutch...