iPads Broaden the Way We Learn, But They Are Also a Huge Distraction 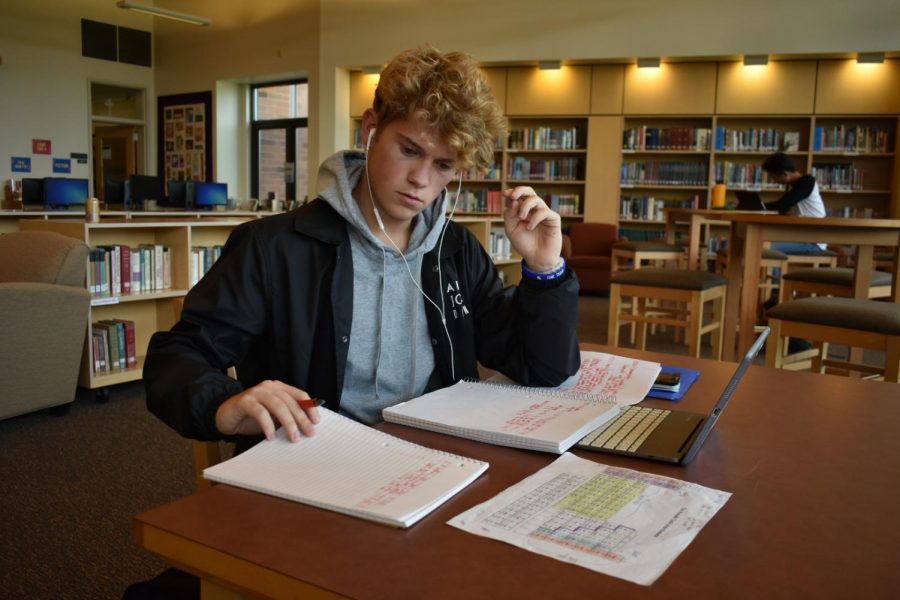 Writing an essay digitally, doing online research, giving a presentation with a digital aid, and turning in homework with the click of a button—the benefits of technology in classrooms are plenty.

Having iPads in classrooms broadens the ways students can learn, for the better. However, speaking as a student who has benefited from classroom technology, they are also often a huge distraction.

Temptations like messaging, social media, games, and other entertainment sources are the things that pull people’s focus away the most during class. When it’s Monday morning and your mind hasn’t woken up yet, it’s very easy to turn to entertainment to wake your mind and body up. We’ve all been there, feeling drowsy and unmotivated during class work time, and feeling the urge to occupy ourselves during a particularly dull moment during the day.

Many students attempt to distract themselves in subtle ways, using split screen for example. However brief one’s diversion may be, it still takes away from their individual focus and learning, as well as the focus of others.

Dakota Canzano, sophomore class president, feels that other people’s lack of focus can be just as distracting as when a notification pops up on her own iPad. “I’ll see people watching Netflix… then I’ll tend to look over and wonder what game they’re playing,” she said. She acknowledges the fact that she too, has been distracted by something on her device, and “everyone has.” Canzano said, “I do think [that] other students distract me, but I think that I also could [have been] a distraction [to other students].”

Sam Hull
Some studies, such as a study conducted by the Pew Internet Project, found that technology in classrooms does in fact affect aspects of student learning. In this particular study, 2,462 teachers of varying grades were surveyed and almost 90 percent of them found that technology had a negative effect on students. In an article discussing the findings of this study and others, the New York Times quotes that “digital technologies [are] creating an easily distracted generation with short attention spans.’”

The New York Times also addressed a study conducted by Common Sense Media, a nonprofit organization that aims to provide parents with knowledge of media. In this study, 685 teachers were surveyed, and 71 percent responded with similar ideas about decreased attention span to those surveyed in the Pew Internet Project study. 60 percent of the teachers surveyed in the Common Sense study said that technology interfered with students’ ability to communicate in person and their ability to write. Half the teachers believed that critical thinking and students’ ability to do homework was also affected negatively by technology.

The representatives surveyed in these two studies were teachers, but students at La Salle have expressed similar opinions. Sophomore Sophie Goodell said, “If kids are… goofing off I get distracted easily.” Evie Mathis has experienced the same thing, and finds that other students are often a source of distraction. “When kids are… texting each other or you’re trying to do a group project and some kids are just not paying attention, [focusing] can be really hard to do,” Mathis said.

While notifications, entertainment apps, and even other classmates’ actions on iPads are often a struggle to ignore for students trying to concentrate, iPads have also widened the opportunities that both students and teachers get to have in classrooms. However, those opportunities only come if we use our technology wisely and efficiently.

One large benefit of having access to technology is the organization it provides. “I think [iPads are] a good idea because it keeps us organized,” said Canzano. “Everything is at your fingertips, and [you have the ability] to research and do your homework with one click of a button. It’s all just there on one device.”

It would be a shame if these numerous benefits that accompany technology in classrooms went to waste because of distractions. In order to use the time you have in school in the best way you can, there are simple steps you can take to maximize your focus.

Turning on Do Not Disturb on your iPad is the most common way to try to avoid distractions from notifications, and you can even schedule the feature to turn on during school hours only. Changing the setting to have your iPad silence notifications ‘always’ will keep banners from popping up on your screen while Do Not Disturb is on.

Students can also simply turn off their notifications for a specific app. For some students, distractions don’t come from general notifications. Still, taking precautions will do a lot more than you might realize.

Removing, or at least reducing, the amount of notifications we receive on our iPads can indirectly remind us to stay on task. “[Receiving notifications] can teach you bad habits,” Canzano said. Staying away from the constant reminder of the media can help break this bad habit many students have made.

The reminder to turn off notifications may be beginning to sound like a broken record for a lot of students. It’s simple advice that we have all heard before from teachers and peers, but it works. Speaking from personal experience, not having iMessage notifications and notifications from other apps subtly reduces distractions that come from your own device. It took some getting used to, but eventually, I formed a habit of focusing only on the task at hand. In certain cases, the temptation to play games or send a text completely slipped my mind because there was no reminder that they were even accessible to me.

Also, remember that blocked apps on the school’s wifi are for our own benefit. Netflix, Snapchat, and Instagram, for example, have something in common: they distract people. Students should learn to use the time they have in school for school. It’s unfortunate when students take valuable work time and waste it on activities they can do at home and on the weekend.

Not to mention using class time to actually work can reduce the amount of homework a student has. With less homework, you have more time for a social life and sleep: two things a lot of teenagers are too busy to manage healthily.

Distractions are inevitable in a classroom environment, but that does not mean technology should take away from students’ learning and ability to focus. “If you’re going to choose to focus in class, then you’re going to focus,” Canzano said. “I think it’s up to you, and how you’re going to use your education.”