Why We Shouldn’t be Allowed to Burn the American Flag 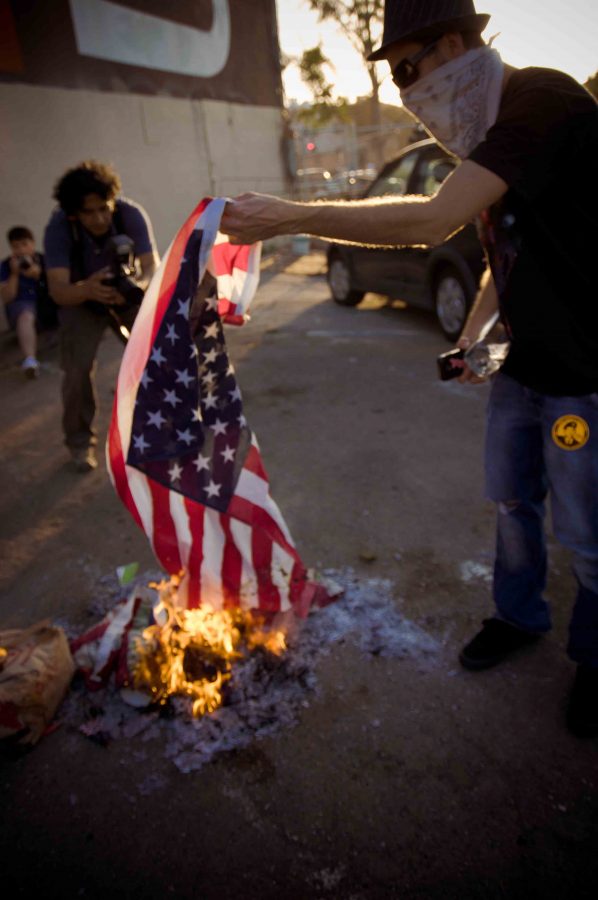 The American Flag, which signifies purity, innocence, hardiness, valor, perseverance and justice, has been mistreated for many years now. At Ronald Reagan’s Republican National Convention in Dallas of 1984, Gary Lee Johnson was arrested for burning the American flag under the Texas flag desecration statute, later to be known as the Texas v. Johnson case.

However, the Supreme Court shot down all attempts to ban flag desecration because they thought that flag desecration was a Constitutionally protected form of free speech. Later, in 1989, the U.S. Congress passed the Flag Protection Act to protest the Johnson decision, but thousands of protesters decided to go burn the American flag in protest of the Flag Protection Act.

Congress also tried to pass a Constitutional amendment that allowed the government to ban flag desecration; however, in 1990 when this amendment was brought up, it failed to achieve the necessary two-thirds majority in the House.

Recently, we have seen an increase in flag burnings ever since our President, Donald Trump, got elected by the people on November 8. I find this really disrespectful because many brave men and women have fought for that flag in order to keep us safe so that we have the freedom to do what we do everyday.

Recently, a video surfaced of a FedEx delivery man, Matt Uhrin, breaking up a flag burning protest in Iowa City, Iowa. They started to burn the American Flag so Uhrin jumped out of his truck with a fire extinguisher to put the fire out and then later grabbed the flag and left.

He is one of many people that find this form of protest very disrespectful. After people saw this video many assumed he was going to get fired, so they started signing a petition to help him keep his job. After this video was seen by millions of people, Uhrin later came out and said “I don’t believe that I deserve the praise. I never wanted it. The ones that are really the heroes are the ones that were injured, maimed, killed — the ones that never got to see home again. They are the heroes.”

After FedEx reviewed the video, they later tweeted “We have reviewed the matter in Iowa City involving driver Matt Uhrin. He remains a FedEx employee & we have no plans to change his status.”

Many people find this pointless form of protest very offensive including a U.S. Marine veteran, Eric Post, who later said in a video, “These flag burning protesters may have a very valid message that they want to get heard, but it’s not being heard by the millions of people that can’t listen past the flag burning.”

If you actually know and understand what the American Flag stands for, you would know that everything these protesters said is totally false. These things that they mentioned above did and still do happen; however, that has nothing to do with our flag and what it stands for.

A lot of protesters use the same excuse for flag burning by saying they don’t like the United States and what it stands for. If they aren’t happy and don’t like America, I would like to see them try living in Syria or any other war torn country for a month and see how different it is. People in these war torn countries have no rights and if they were caught acting out the same way they do here in the United States, they would be publicly executed. I’m sure they wouldn’t like it at all and want to come back to America as soon as they can.

I very firmly believe in the First Amendment; however, I also think that we need to make a new law against burning the American Flag. Maybe not as intense as what Donald Trump said (“Nobody should be allowed to burn the American flag, if they do, there must be consequences – perhaps loss of citizenship or year in jail”), but possibly a fine for anyone seen burning it.

The American Flag is the symbol of the American people, our freedom, and our history. It is sacred to many Americans including my family. Several of my uncles fought in the Navy and the Marines. Even though it may be just a cloth, it means more than that.

It’s a symbol of our unification and republic. We have freedom of speech, which I totally support, but I do not support burning the exact flag that thousands of Americans have died for. It’s not only dishonoring them, but our nation as a whole.